While a man was on a flight from Largo, Fla. to Houston, Texas, a rather unanticipated turn of events took place on the runway. As the flight attendants prepared everyone for takeoff, the man was disgusted to see a pin with a rude remark on a flight attendant’s uniform. The man answered with three simple words, but no one suspected what happened next.

Robert Coyle was sitting in his seat when he noticed a pin on a black flight attendant’s uniform. After taking a closer look, he was appalled at what he read. The woman’s pin read, “Black Lives Matter, White Supremacy Kills.”

Robert knew he had to speak his mind to the flight attendant, and he did just that. Instead of making a big deal out of it, he decided to just say three simple words to the woman: “All lives matter.” However, the simple statement infuriated the woman and she immediately went too far.

“I don’t agree with you, I disagree with you on so many levels,” the woman told Robert, according to Fox 13. “I really can’t speak politically while wearing a uniform.” Apparently, the woman had forgotten that she wore a political statement right on her uniform for the public to see. 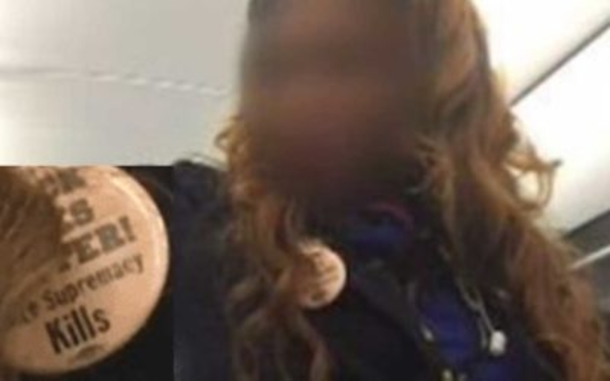 Robert immediately snapped a picture of the companion and her rude, politically incorrect message. Unfortunately the woman spotted Robert while taking the picture and demanded that he delete it. A few moments later, as the plane approached the runway, the flight attendant must have decided that Robert deserved a greater punishment for his actions and asked the pilot to return to the gate, where the paying customer was removed from the plane.

Fortunately, Robert was later able to recover the photo and share it with the world on the internet. “No company should allow this to happen unless they are willing to accept the consequences of doing so,” Robert said, according to Blue Lives Matter.

The 14-month-old airline employee has not been identified but was disciplined by her superiors. “If you have something lewd on your uniform, you will offend customers,” Robert said, “and customers will pay the bills.”

If you work in a position where you are constantly in the public eye, there is no excuse for flaunting your own beliefs on your uniform, especially when they align with anti-police groups like Black Lives Matter. Robert was simply saying what is true – all lives matter.