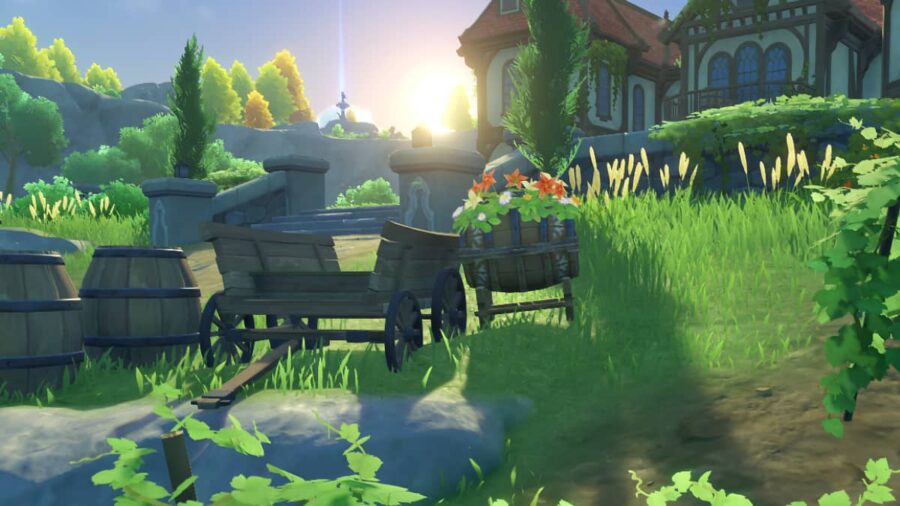 Fecund Blessings is one of the four activities you can enjoy in the Genshin Impact Of Ballads and Brews event celebrating the Grape Harvest Festival, one of Monstadt’s most important holidays. The event runs from 09/29, 2022to October 17th, 2022while you can exchange Festive Fever rewards to October 24th, 2022.

In Fecund Blessings you can collect Fecund Blessings hidden by NPCs in Monstadt. These look like barrels decorated with flowers and are essentially chests – looting them will give you loads of rewards, including furniture to decorate your shop with.

There are three Fecund Hamper hunting sessions, and this guide will cover the third round that will be called The after party. You must complete the first two parts, When the Music Sounds and The Feast in Full Swing, before you can unlock this. Refer to the image above for all of the Fecund Hampers’ locations, and read on for a more detailed breakdown of where to find them.

The first Fecund Hamper is on the cliff near Diona’s house in Springvale.

The second fertility basket is behind Nurse Annette’s bulletin board in Springvale.

The third Fecund Hamper is at the waterfall south of Springvale.

The fourth Fecund Hamper is near a house in Springvale.

The fifth Fecund Hamper is at the base of the giant tree in Windrise.

The sixth Fecund Hamper is located in an adventurer’s camp near Windrise.

The seventh Fecund Hamper is next to the signpost marking the entrance to Diluc’s mansion in Dawn Winery.

The eighth Fecund Hamper is under some vines next to the Dawn Winery dormitory.

Check out our guide on how to customize the shop in Genshin Impact Fecund Blessings Shop Colors – Of Ballads and Brews for rewards for collecting Fecund Hamper furniture.

The Prince of Wales meets young footballers at St. George's Park in Burton upon Trent

All Classes in Zenith: The Last City

All characters and their voice actors in strategy triangle