September 2022, Andy Cohen shared some of the trolling and negative messages he’d received about his looks and family on social media, hitting out at those behind the comments.

The Watch What Happens Live host shared a screenshot of messages he received from someone about his baby daughter Lucy, in which someone asked him, “Are you worried [because] she doesn’t smile.” The question was followed by a series of unsolicited comments advising Cohen to spend more time with his daughter. The screenshot showed Cohen responding, at least in part, with “She smiles all the time.”

He shared the screenshot on Instagram with the caption, “These are the kind of cops I deal with.” He later added another screenshot with the caption, “And more!” The second screenshot showed that he received a message from someone who said, “Babe, you need a skin touch-up and some botox, I love you to death but I gotta call it how I see it…” Cohen replied to that person apparently: “I’m happy with my face. Many Thanks.” 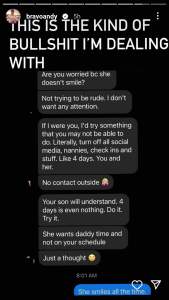 Unfortunately, this isn’t the first time Cohen has revealed he’s been trolled on social media. On September 9, 2021, Cohen Screenshots posted an interaction he had regarding his son Ben. “You should try to be a better person for your son,” the person wrote in a direct message to the Watch What Happens Live host. Cohen responded to the person by asking, “What am I doing wrong?”

The person responded with a weird apology: “Oh wow I wasn’t expecting an answer. I was just a troll. You’re doing fine. Sry.” Cohen told them, “I am indeed a real person. Thanks for understanding.” The conversation between the two continued, with the troll telling him that it was really “cool” that Cohen had replied, but had given him some advice: “You probably shouldn’t confront trolls though.”

Cohen replied, “You probably shouldn’t be trolling people though.” He posted the interaction on Instagram with the caption, “Social media in a nutshell…”

Cohen is a single parent to 2 children, Ben & Lucy

Cohen has been open about his family and being a single father, welcoming Benjamin Allen Cohen on February 4, 2019. Earlier this year, he made a surprise announcement that he would welcome his daughter, Lucy Eve Cohen, on April 29, 2022.

“After many years of careful thought, quite a bit of prayer, and the benefit of science, if all goes according to plan I will be a father in about six weeks thanks to a wonderful surrogate mother who will carry my future. “Cohen first shared on WWHL in December 2018. “Family means everything to me and to have one of my own is something I have wanted in my heart all my life and although it has taken me longer than most to get there, I can can’t wait for what I envision to be the most rewarding chapter yet.”

In April 2022 he continued to write Instagram, “HERE’S LUCY!!!!! Meet my daughter Lucy Eve Cohen! She weighs 8 pounds 13 ounces and was born at 5:13 PM in New York City!!!” Cohen thanked his surrogate and commended all surrogates. The Bravo boss welcomed both Ben and Lucy, who are “biological siblings,” via a surrogate. persons reported.

Former Bills No.1 WR goes to IR with hamstring injury

Iran scrambles to contain street protests; Is this how the Islamic Republic falls?

The best deals in the annual Victoria’s Secret sale 2021

Fabio Paratici personally observed the player before Tottenham signed him

What breed is Khloe Kardashian and True’s new pet cat?