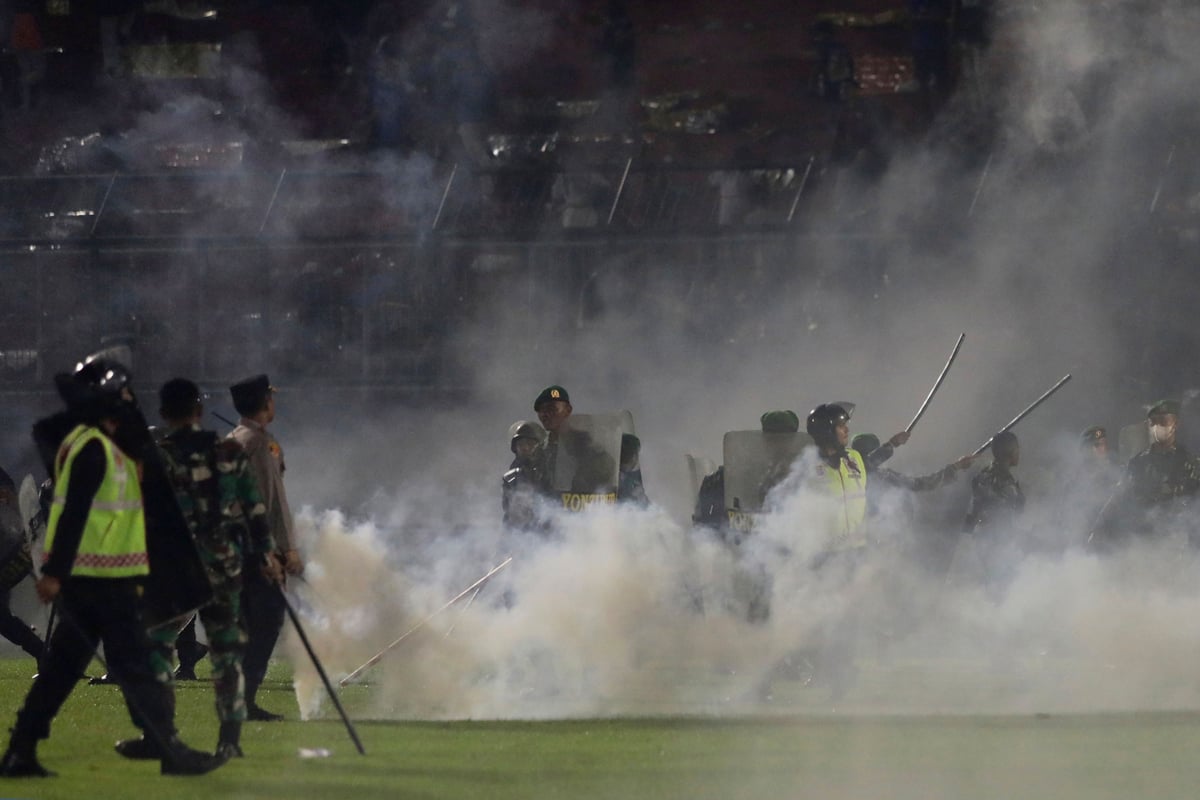 At least 125 people died fleeing in panic and chaos after police fired tear gas at an Indonesian soccer game to disperse fans angry at the loss of their team.

Most of the people who died were trampled or suffocated, making it one of the deadliest sporting events in the world.

Attention immediately focused on the police’s use of tear gas, and witnesses reported officers beating them with sticks and shields before firing canisters directly into the crowd.

The Fifa president called the deaths at the stadium “a dark day for everyone associated with football and an unbelievable tragedy”, while President Joko Widodo ordered an investigation into security procedures. While Fifa has no control over domestic matches, it has discouraged the use of tear gas in football stadiums.

Violence erupted after the game ended on Saturday night as hosts Arema FC from the city of Malang in East Java lost 3-2 to Persebaya from Surabaya.

Disappointed at the loss of their team, thousands of Arema supporters, known as ‘Aramania’, responded by throwing bottles and other objects at players and football officials.

Witnesses said fans flooded the pitch at Kanjuruhan Stadium, urging Arema management to explain why it ended in defeat after 23 years of unbeaten home games against Persebaya.

The violence spread outside the stadium, where at least five police vehicles were overturned and set on fire. Riot police responded by firing tear gas, including into the stadium’s stands, causing panic among the crowd.

Spectator Ahmad Fatoni said police started hitting fans with sticks and shields and they fought back.

“The officers fired tear gas directly at the spectators in the stands and forced us to run to the exit,” he said. “Many victims fell from tear gas and were trampled on due to shortness of breath and blurred vision.”

He climbed onto the roof of the grandstand and only came down again after the situation had calmed down.

Others were suffocated and trampled as hundreds of people ran to the exit to avoid the tear gas.

In the chaos, 34 died at the stadium, including two officers, and some reports included children among the victims.

More than 300 people were taken to hospitals, but many died en route and while being treated, Mr Afinta said.

National Police Chief Listyo Sigit Prabowo said the death toll had been revised from 174 to 125 after authorities found some of the victims had been double-counted. More than 100 people received intensive care in eight hospitals, 11 of them in critical condition.

The Indonesian Football Association, known as PSSI, has suspended the first football division Liga 1 indefinitely in light of the tragedy and banned Arema from hosting football matches for the remainder of the season.

TV reports showed police and rescue workers evacuating the injured and carrying the dead to ambulances.

Mourning relatives awaited information about their loved ones at Malang’s Saiful Anwar General Hospital. Others attempted to identify the bodies lying in a morgue while medical personnel attached identification tags to the bodies.

“I deeply regret this tragedy and hope this will be the last football tragedy in this country. Do not allow another human tragedy like this to happen in the future,” Mr Widodo said in a televised address.

He directed the youth and sports minister, the national police chief and the PSSI chairman to conduct a thorough assessment of the country’s football and its security procedures.

Fifa President Gianni Infantino issued a statement expressing his condolences on behalf of the global football community, saying: “The football world is in shock”.

Fantasy Football Week 4 Running Back Rankings: Here's Who to Start When You're Missing Someone

Again and again concerts for the Ukraine