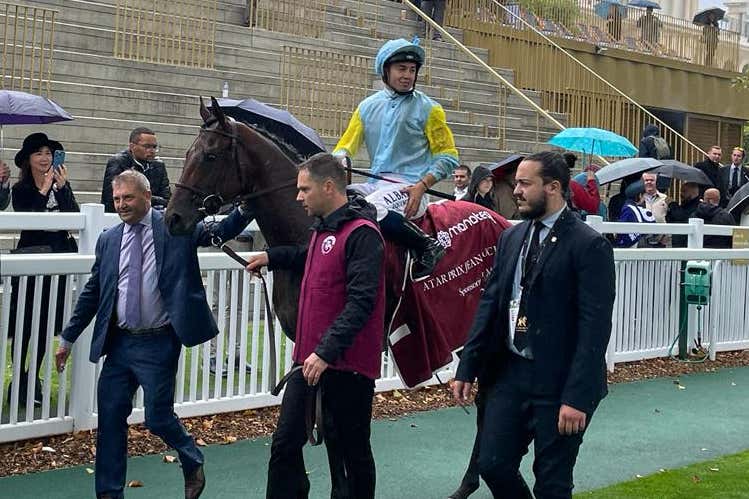 Belbek stayed strong under a well-timed ride from Mickael Barzalona to narrowly win the Qatar Prix Jean-Luc Lagardere at ParisLongchamp.

The Andre Fabre-trained colt was consistently close to the top in Group One’s seven furlong competitions, sitting just short of the pace set by Vicious Harry.

Barzalona, ​​winning the race for a fourth time, made his move aboard Belbek within the last furlong and passed Gamestop, who had hit the front 200 yards from the winner’s post.

“He couldn’t settle down in his first race, but he’s a good-looking, well-bred horse,” said Fabre.

“Let’s see how he’s doing but maybe I’ll take him to the Vertem Futurity Trophy at Doncaster. If he ran again, it might be there.

“The Breeders’ Cup (which he qualified for by winning) would not be my preferred option.”

We’ll see how he’s doing but maybe I’ll take him to the Vertem Futurity Trophy at Doncaster. If he ran again, it might be there

Paddy Power introduced Belbek as a 12-1 chance for Doncaster Group One on 22 October.

Owner Nurlan Bizakov suggested leaving the plans in the hands of Fabre.

“It’s up to Andre. We’ll see if it jumps and is fresh. Whatever Andre suggests because he’s the best coach,” he said.

“This win means a lot as it is our first success in Group 1 with the very first foal we have bred in France, a country where we usually do well.

“We’ll see how the colt recovers from this race. It is possible that he will be added for a British Group 1 race, the Vertem Futurity Trophy. It is Andre Fabre who will decide.”

While Fabre isn’t keen on the Breeders’ Cup for the winner, Alessandro Botti would be happy to take on the challenge with Breizh Sky.

He said: “We knew he wouldn’t mind the soft surface and it was only his fourth start. I hope that next year he will have more room for improvement.

“If the colt is okay, we could make the trip to the Breeders’ Cup. It could be increased to 1,600 meters.”

Crowd plots robbery of San Jose Macy, police criticized for handling of those who allegedly interfered