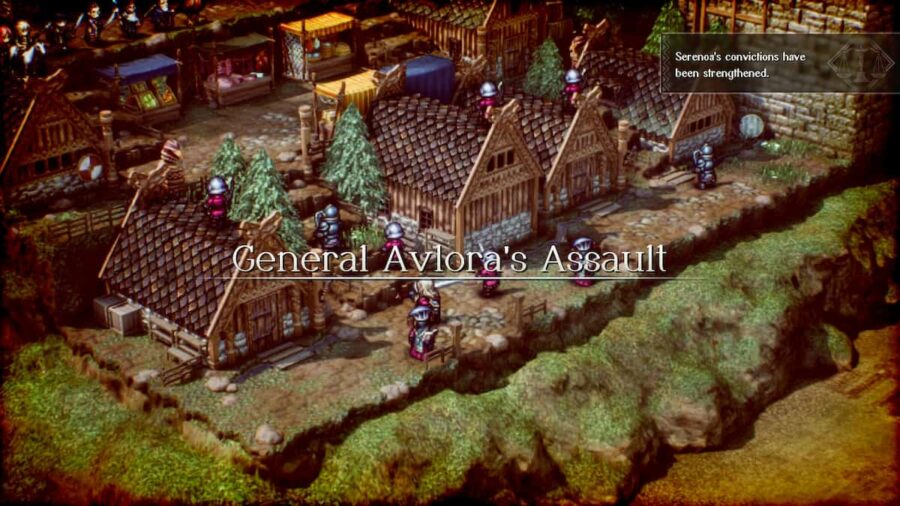 Chapter VII, Part II of Triangle Strategy: Not a Word, My Friend opens at Wolffort Streets, where you wait for General Avlora after his party decided not to surrender Roland to Aesfrost. A new battle, General Avlora’s Assault, will begin when you choose your unit. To win, “destroy all enemy forces.” To lose, you will have to watch your last ally be destroyed.

Save before this fight, because you don’t want to risk using the Hawk statue. If you activate even one, Golden Route Ending will not be available. Along with the savings, make sure to upgrade your characters to the recommended level 11 using Spirit Forge Battles at Camp. Use the loot, especially from Hossabara’s latest battle available, to upgrade the weapon ranks of your strongest warriors. Stock up on accessories and enough HP Recovery Pellets from Lionel.

Also, take advantage of this opportunity before battle to strengthen the helpful new characters that have appeared to you depending on Serenoa’s Beliefs. Report, Archibald, and Julio, for example, all offer serious strengths. Not only does Narve know fire, ice, thunder, and wind magic, he can also heal multiple units with his Sanctuary ability. Archibald, though slow, is capable of devastating arrow attacks that deal damage to multiple targets.

But Julio grants his allies extra TP and increases the ally’s attack and magic attack stats. He can also steal enemy TP while dealing damage. All in all, he’s a good buff to Benedict’s stat-enhancing abilities, but he deals more damage — and he deals in TP. Delivers a heavy attack with high defense, like Eradoras Geelahealing abilities and Haste will be invaluable.

The battle will begin with reinforcements immediately, but don’t let them intimidate you. Don’t advance any unit too far, except maybe give Anna. Use her Take Cover skill, and utilize her two commands per turn to wreak havoc invisibly. And make sure you have Hughette to attack and blind enemies from the rooftops.

How to defeat General Avlora

When you start attacking enemy units, second regiment of the two level-11 Shield Characters will come from the middle along with two level-11 archers behind Avlora. When you take down a few more units, third and final regiment reinforcements will arrive, also in two groups — three Sheildbearers and one Bowman from the top, behind where you started, as well as a Shieldbearer and Blade in the bottom corner, facing Avlora.

Avlora is at level 15, and the Amulet of Immunity protects her from conditions like Blindness. It will take a while to reduce her high HP, so keep using your strongest attacks on her until she falls. Heal often, whether by pill or magic. If you’re trying to prevent the destruction of a hawk statue, be very careful not to accidentally hit a statue with a magic attack or an arrow. Collect all the loot and you will be awarded the Medal of Courage when you win.

For more help with Triangle Strategy, keep it here on the Pro Game Guide.

The Ukrainian MiG-29 Fiasco got worse

The Dark Pictures: The Devil In Me is out this November