“Have that mind among you, which is ye in Christ Jesus, who, though in the likeness of God, did not regard godliness as a thing to be grasped, but emptied himself, taking on the form of a servant, being born in the likeness of men. And when he was found in human form, he humbled himself by becoming obedient to the point of death, even death on a cross.‘ – Philippians 2:5-8.

Christians around the world today celebrate Good Friday, the solemn anniversary of the execution of Jesus of Nazareth on a wooden cross on a hilltop outside the walls of Jerusalem in Israel in AD 30. This is one of the two crucial days of Holy Week, the other being the Easter Sunday. Christians believe that this was an act of sacrifice by a perfect and sinless human being who died in place of imperfect humans to pay for their sins and assure them of eternal salvation. 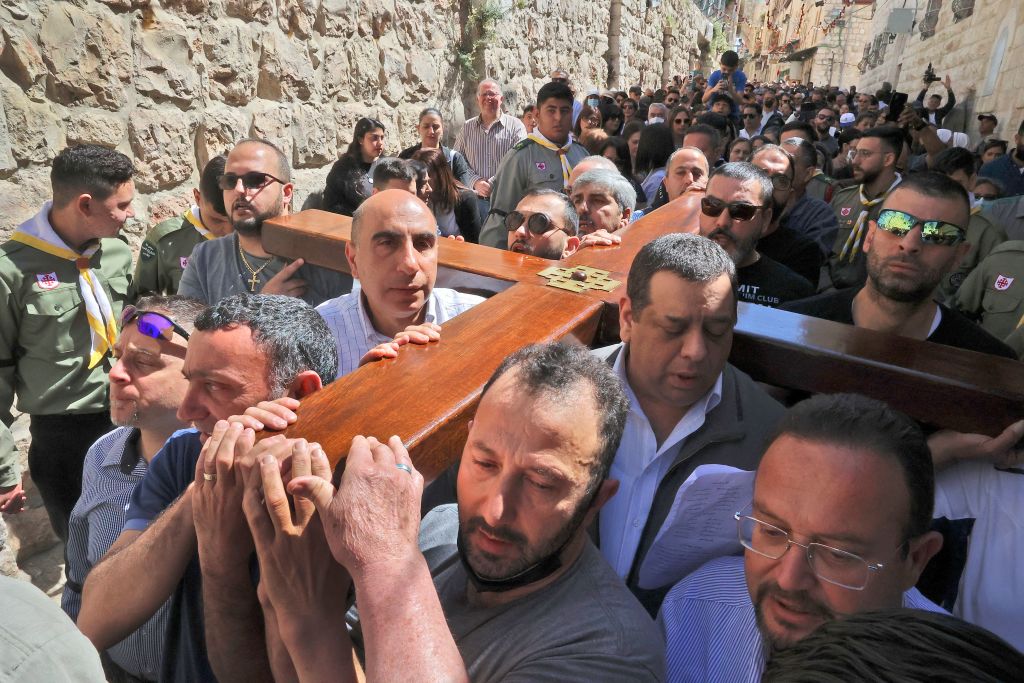 Christian worshipers carrying a wooden cross walk to the Church of the Holy Sepulcher during the Good Friday procession in Jerusalem’s Old City April 15, 2022. (Hazem Bader/AFP via Getty Images)

In an increasingly secular society, many people are unfamiliar with the historical accounts of Jesus’ death. The Bible contains four of them. From the Gospel of Luke:

Pilate then called together the chief priests and the princes and the people and said to them: “You brought me this man as one who had misled the people. And after examining him before you, behold, I have not found this man guilty of any of your charges. Neither did Herod, for he sent him back to us. You see, nothing deserving of death was done by him. I will therefore punish him and release him.”

But they all cried out in unison, “Away with that man and let’s free Barabbas!” – a man who had been imprisoned for a riot started in the city and for murder. Pilate spoke to them again, wanting to release Jesus, but they kept shouting, “Crucify, crucify him!” A third time he said to them, “Why? What evil has he done? I have found in him no guilt that deserves death. I will therefore punish him and set him free.” But they were urgent and shouted loudly that he should be crucified. And their voices won out. So Pilate decided that their claim should be granted. He released the man imprisoned for rioting and murder that they asked for, but yielded Jesus to their will.

And when they were leading him away, they seized one Simon of Cyrene, who was coming in from the country, and put the cross on him to carry after Jesus. And a great multitude of the people and women followed him, mourning and mourning for him. But Jesus turned to them and said: “Daughters of Jerusalem, do not weep for me, but weep for yourselves and for your children. For behold, the days are coming when they will say, “Blessed are the barren, and the womb that never bears, and the breast that never sucks!” Then they will begin to say to the mountains, “Fall on us,” and to the Hügeln: “Cover us up.” Because if they do these things when the wood is green, what will happen when it’s dry?”

Two others who were criminals were taken away to be killed with him. And when they came to the place called The Skull, they crucified him there and the criminals, one on his right and one on his left. And Jesus said, “Father, forgive them, for they know not what they are doing.” And they cast lots to divide his clothes. And the people stood by and looked on, but the rulers mocked him, saying: “He saved others; let him be saved when he is the Christ of God, his chosen one!” The soldiers also mocked him, came to him and offered him sour wine, saying: “If you are the king of the Jews, save yourself!” Over him was also an inscription: “This is the king of the Jews”.

One of the hanged criminals scolded him and said, “Aren’t you the Christ? Save you and us!” But the other rebuked him, saying: “Do you not fear God, since you are under the same judgment of condemnation? And rightly so, for we get due reward for our deeds; but this man has done nothing wrong.” And he said, “Jesus, remember me when you come into your kingdom.” And he said to him, “Truly I tell you, today you will be with me in paradise. “

It was now about the sixth hour, and it was dark over all the land until the ninth hour, while the sun’s light was dying. And the veil of the temple was torn in two. Then Jesus cried out with a loud voice and said: “Father, into your hands I commend my spirit!” And having said this, he breathed his last. Now, when the centurion saw what had happened, he praised God and said, “Truly this man was innocent!” And all the crowds that had gathered for the spectacle returned home when they saw what had happened back and beat their chests. And all his acquaintances and the women who had followed him from Galilee stood by and watched these things.

Now there was a man named Joseph from the Jewish city of Arimathea. He was a member of the council, a good and righteous man, who had not approved of their decision and action; and he sought the kingdom of God. This man went to Pilate and asked for the body of Jesus. Then he took it off and wrapped it in a linen cloth and laid it in a carved stone tomb where no one had ever been buried. It was Preparation Day and the Sabbath began. The women who had come with him from Galilee followed and saw the tomb and how his body was laid. Then they returned and prepared spices and ointments.

On the Sabbath they rested according to the commandment.

“Come see the wondrous mystery, Christ the Lord on the tree;

In place of ruined sinners the Lamb hangs in victory.

See the price of our redemption, see the Father’s plan unfold;

Ken Klukowski is a contributor to Breitbart News.

https://www.breitbart.com/faith/2022/04/15/christians-observe-good-friday-2022-the-place-called-the-skull-there-they-crucified-him/ Christians Celebrate Good Friday 2022 – “The Place Called the Skull, There They Crucified Him”

How It Feels to Watch Ja Morant Fly: "A Wizard Up There"

KGF Chapter 2 downloads are increasing despite claims of illegal recordings

Daniel Sougstad to appear in court for murder of parents, brother