Deutsche Bank AG beat expectations and posted increased fourth-quarter profit. Another sign is that the bank has stabilized again, for the first time since 2019, the bank will pay dividends to shareholders.

Like the major investment banks in the US, Deutsche Bank has posted bumper profits during the pandemic. Client activity exploded as companies raised huge amounts of capital and the market entered a period of intense trading. Those trends have begun to fade in recent months. But Deutsche Bank saw other units grow well in the fourth quarter, including its business serving corporate customers.

The German lender said net profit jumped 67% to €315 million ($354 million) in the last three months of 2021 compared with the same period a year earlier. Analysts had forecast a profit of 26 million euros. Helping the result was a tax of 234 million euros. Revenue increased 8%, although expenses increased more.

Chief Executive Officer Christian Sewing said the bank was still on track to meet its financial goals this year, including an 8% return on tangible equity – a key metric for profitability. word.

Deutsche Bank carried out a major overhaul in 2019, promising to downsize its Wall Street presence and cut costs. The higher costs associated with legal obligations have made it more difficult to meet those cost targets. Like other global banks, the cost of compensating bankers has also increased.

Deutsche Bank posted profit for the second consecutive year and the highest since 2011 with 2.5 billion euros, opening the door for a dividend of 0.20 euros a share. The bank also said it would buy back 300 million euros of shares in the first half of this year, the first step in its commitment to return 5 billion euros to shareholders over time.

In March, Mr. Sewing will reveal the bank’s strategy and new goals for the coming years. The bank’s lending is expected to improve as central banks around the world raise interest rates.

Negative interest rates in the euro area have made it difficult for institutions like Deutsche Bank to make money based on the disparity between what the bank pays on deposits and the amount it charges to let get a loan.

Deutsche Bank’s future also hinges on whether the bank can stay away from the kinds of troubles with regulators and authorities that have long dogged the bank. In December, The Wall Street Journal reported that the US Department of Justice had informed the bank that it may have violate a criminal settlement when it failed to notify prosecutors of an internal complaint about the sustainability investment business of its wealth management arm, DWS Group. 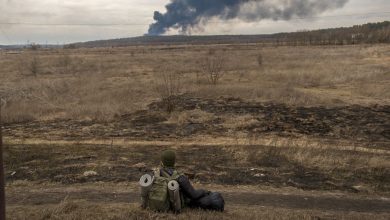 War in Ukraine fanned the flames of global inflation

Venture capitalists feel the pain of the stock market