Car use in London boroughs where controversial low-traffic areas have been built during the pandemic has risen faster than in areas where the schemes have not been adopted, new government data shows.

Councils that introduced the controversial £250million project to discourage through traffic and encourage “active travel” saw an increase in total vehicle miles last year compared to counties that did not implement LTNs, according to Department for Transport statistics showed.

The ten inner London boroughs that introduced the car-free zones saw total vehicle-kilometres increase by an average of 41 million (11.4 per cent) in 2021 as road traffic in the capital returned to levels similar to those seen before the first lockdown.

Meanwhile, Westminster, Kensington and Chelsea, the two inner boroughs that opted not to introduce LTNs in 2020, saw an average increase in total kilometers of just 29 million (8.9 percent), the Times reports.

If the total kilometers driven in the London boroughs where LTNs were introduced had increased at the same rate as in the non-LTN boroughs, it is estimated that 89 million kilometers could have been saved.

Critics have long warned that LTNs, which close some streets to through traffic to reduce pollution on residential streets, are forcing more vehicles onto already busy main roads, arguing that many of the schemes were introduced without proper advice.

Others point out that motorists and emergency services are being forced to take longer routes as their journeys are being routed around LTNs.

The hated systems have also been accused of having little impact on pollution, simply shifting congestion and CO2 emissions to other areas.

The news comes just weeks after the Department for Transport admitted that the traffic data originally used to justify the implementation of LTNs was wrong – similar measures are now being introduced in Oxford and Bristol. 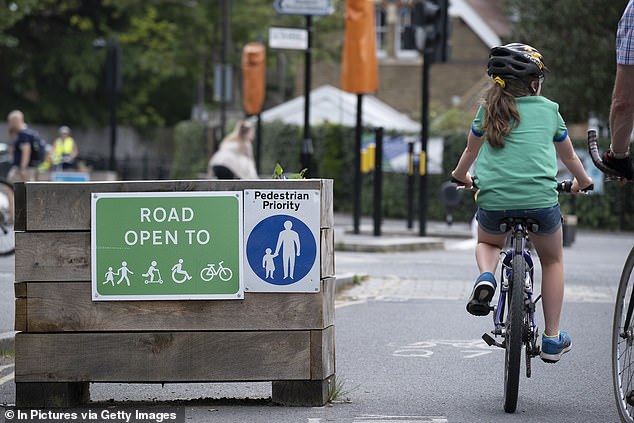 The ten inner London boroughs that introduced the car-free zones saw total vehicle-kilometres increase by an average of 41 million (11.4 per cent) in 2021 as road traffic in the capital returned to levels similar to those seen before the first lockdown. Pictured: A cyclist rides through an LTN in Southwark

Critics have long warned that LTNs, which close some streets to through traffic to reduce pollution on residential streets, are forcing more vehicles onto already busy main roads, arguing that many of the schemes were introduced without proper advice

The hated systems have also been accused of having little impact on pollution, simply shifting congestion and CO2 emissions to other areas

Cities across the country rolled out LTNs shortly after the first lockdown in March 2020 as part of their policies to reduce car traffic and encourage cycling and walking. Adequate pre-LTN monitoring was often not performed.

The plans include pop-up bike lanes, wider sidewalks and closing streets to cars. New rules are being enforced with warning signs and surveillance cameras in London.

More than 300 car-free programs have been installed or are in the pipeline across the UK in the last two years.

London’s Labor Mayor Sadiq Khan has been a particularly vocal advocate of them, providing guidance to the capital’s 32 town halls on their creation.

The Labor Mayor has also backed plans to extend the Ultra Low Emission Zone boundary from the North and South Circular Roads to the whole of Greater London from August 29 next year.

Last year, Ealing Council announced plans to scrap seven of London’s LTNs after they were found to be increasing local congestion and causing “no significant change in air quality”.

And a separate analysis of London Fire Brigade data showed firefighters had slowed response times by 3,035 times over the past year and a fifth of the delays were due to traffic calming measures.

The expansion of London’s Ultra Low Emission Zone was launched last October and is 18 times larger than the original zone. The latest expansion proposal would make it four times larger

Earlier this year Freedom of Information requests revealed that Southwark Borough, which has three LTNs, has handed out the most fines to motorists – 127,350 worth £7.1million.

In all, 755,098 fines, worth almost £33.6million, have been handed out by London councils since April last year.

But residents and small businesses have hit back at LTNs after claiming the capital’s “war on motorists” has severely impacted their daily commutes and profits.

A number of car-free schemes in London were scrapped last year after they were found to increase local congestion and cause “no significant change in air quality”.

Earlier this year, it emerged that even Green Party politicians running in local elections had admitted the plans could “do more harm than good”.

And Tory candidates in 21 boroughs placed 136 ads on Facebook pledged to scrap LTNs, or clean air zones – which charge motorists for driving through inner cities in older vehicles.

In Ealing, between 63 and 79 per cent of those living within the systems oppose it, and for those living on the borders it climbs to 67 to 92 per cent (protesters march on Ealing Town Hall in April 2021).

The damning report challenges the government’s repeated claims that LTNs are a popular idea with the public (pictured: motorists digging up flowers and destroying plants as part of a furious protest against restricted traffic areas in Dulwich Village, south London)

Two other LTN systems in London’s Redbridge cost £297,971 but were scrapped after just over a month after residents complained. A further £29,762 was then spent to get the roads back to normal.

A review by Wandsworth Borough Council last December found that nitrogen dioxide (NO2) levels were higher on 11 roads due to nearby road closures but fell when seven LTN systems were shut down.

Mr Khan has also irked London drivers in recent years with policies such as increasing the time and price of congestion charging, while cycle lanes have proved hugely unpopular with motorists because they cause longer journey times.

In May, Mr Khan announced plans to expand ULEZ to cover a further 3.5 million motorists in Greater London.

The mayor’s office estimates that the expansion would affect an additional 135,000 vehicles. This would bring in almost an extra £1.7million a day.

But TfL insists the money it makes from ULEZ is reinvested in walking, cycling and public transport.

https://www.soundhealthandlastingwealth.com/covid-19/drivers-in-london-boroughs-where-cycle-friendly-ltns-were-introduced-saw-more-traffic-in-2021/ Drivers in London boroughs that have rolled out bike-friendly LTNs saw MORE traffic in 2021