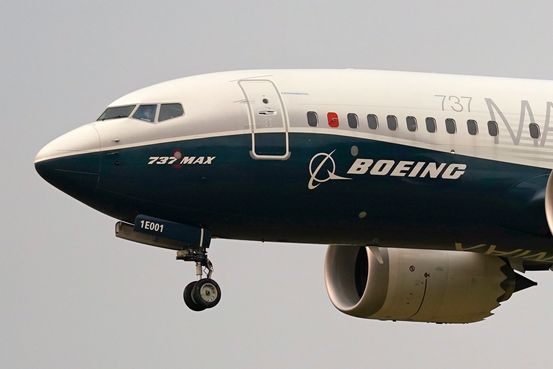 FORT WORTH, Texas – A jury found a former Boeing co

Pilot not guilty of deceiving flight safety officials about a 737 MAX’s flight control system that was later blamed for two fatal crashes.

The decision at the four-day trial in Fort Worth came after less than two hours of deliberation and acquitted Mark Forkner on all four counts of wire fraud. Mr Forkner was accused of misleading a Federal Aviation Administration training official about an automated cockpit feature designed to reduce the amount of training required for pilots to fly the plane, thereby making the jet more attractive to airlines.

After US District Judge Reed O’Connor read the verdict, Mr. Forkner became emotional as his attorneys hugged him. Crying, he smiled and hugged his wife, who was in the courtroom with other supporters.

Mr Forkner, 50, declined to comment. His attorneys said they were grateful to the jury for their independence in considering the Justice Department’s case. “You saw through it, and we’re very grateful,” said David Gerger, one of Mr. Forkner’s attorneys.

A Justice Department spokesman said the agency stands by the efforts of prosecutors and law enforcement to investigate and hear the case. “Although we are disappointed with the result, we respect the jury’s verdict,” said the spokesman.

Mr Forkner was the only person charged in connection with the crashes, which is believed to be part of the Department of Justice’s effort to hold individuals accountable for their roles in corporate wrongdoing.

Lawyers for Mr Forkner had argued that federal prosecutors were targeting him as a scapegoat for the accidents that killed 346 people. They determined that Mr. Forkner was not an engineer and that many others were involved in the design and certification of the flight control system.

The trial began Friday in a Fort Worth federal courthouse and was shorter than expected. Mr Forkner’s lawyers called a single witness – a current Boeing pilot – who testified Wednesday before ending the arguments.

The jury had few reservations about its verdict, according to a juror, who declined to give his name.

“There was a bit of discussion about what else he could have done,” the juror said of Mr. Forkner’s communications with the FAA. The government eventually produced “very little evidence” to support its claim that Mr. Forkner was deliberately trying to deceive his FAA counterpart.

“We saw it as more of an entrepreneurial and regulatory failure of communication,” said the juror.

Mr. Forkner was the company’s lead technical pilot for the 737 MAX during the aircraft’s development. In his role, he was responsible for training materials and pilot’s manuals for the aircraft. He left Boeing in 2018 to work at Southwest Airlines co

Mr O’Neill said Mr Forkner learned that the automatic cockpit function, known as MCAS, had been enhanced to be activated in low-speed flight conditions, but did not tell Ms Klein and then tried to use his to cover up deception.

Boeing originally designed the 737 MAX’s MCAS system to activate during certain high-speed maneuvers that pilots would rarely encounter in order for the aircraft to meet certification requirements. But during the plane’s development, the company’s engineers decided they needed to expand the system’s power to push the plane’s nose down even in certain low-speed conditions.

Accident investigators accused MCAS of sending two 737 MAX jets into fatal dives in late 2018 and early 2019. The crashes resulted in a nearly two-year grounding for all 737 MAX aircraft and disrupted the global airline industry. In addition to the Justice Department’s criminal investigation, they also led to investigations by Congress and the regulator, as well as a new federal law aimed at strengthening oversight of aircraft manufacturers.

Defense attorneys said Mr Forkner was never told MCAS’s powers had been extended to lower speeds, arguing that he was trained by Boeing engineers and test pilots responsible for developing the automated cockpit function and building the plane had been kept dark.

Mr Kearney noted that Ms Klein had testified that she wanted accurate information and said Mr Forkner gave it to her “when he knew it”. Defense attorneys have said others at the FAA were aware of changes to MCAS.

Defense attorneys also pointed out that the government did not provide a recording of a telephone conversation in which Mr Loffing claimed he had told Mr Forkner that MCAS had in fact been expanded.

Mr Loffing testified on Tuesday that Mr Forkner called him after a 2016 simulator experience in which prosecutors claimed Mr Forkner learned the system had been expanded, telling a colleague in a chat message: “So did I (unknowingly) lied to the regulators. ” Mr Forkner’s attorneys argued that the former Boeing pilot complained about a malfunctioning simulator, not MCAS.

In a settlement with the Justice Department last year, Boeing agreed to pay $2.5 billion to investigate allegations that its employees misled the FAA. The deal included a $244 million fine and nearly $2.3 billion in compensation for airline customers and families of the crash victims.

As Mr. Forkner and his attorneys exited the small federal courthouse in downtown Fort Worth, he met the jury, who later spoke to the Wall Street Journal.

“It was an easy decision,” the juror told Mr. Forkner.

The juror then asked if a cold vodka was in Mr. Forkner’s future, referring to a drink mentioned during the trial. Mr. Forkner laughed, said maybe, and thanked the jury before exiting the courthouse.

write to Andrew Tangel at Andrew.Tangel@wsj.com

Are there cheats in Tunic?

This dark spot treatment has 5,000 perfect reviews on Amazon