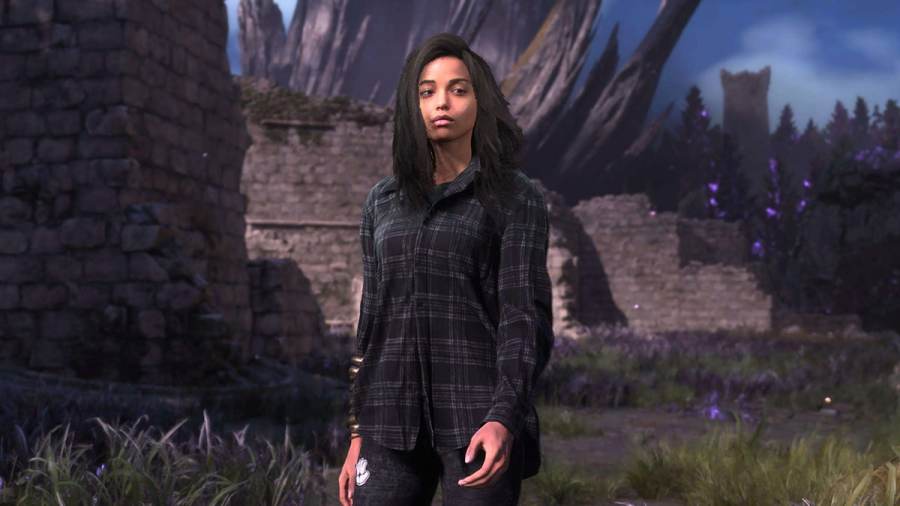 Forspoken is a new role-playing adventure title developed by Luminous Productions following their work on 2016’s Final Fantasy XV. Despite being a refreshing and unique twist on the RPG genre, it shares many well-known design options found in many modern Square Enix games. But is it good? Or will it ultimately fall into the same traps that held Final Fantasy XV back? This Forspoken review answers those questions and determines if it’s worth your hard-earned money.

Within the first hour of entering Athia, Forspoken’s parkour gives you the tools to whiz across the map at breakneck speed. Parkour is at the heart of the gameplay, helping you in both combat and mountain climbing. Players can improve their travel skills and spells, and feel like they are becoming more and more powerful as the story progresses. For example, a Parkour spell like Leap might seem simple when you first get it, but it completely morphs when you eventually gain access to Soar. With the second ability unlocked, you can now perform multiple leaps in the air, allowing you to scale mountains in seconds.

Luminous Productions offers you multiple magical ability trees to customize the gameplay to your liking. Forspoken’s gameplay keeps a good pace throughout the adventures, as Frey’s magical abilities improve significantly as the story progresses. However, those looking for a traditional RPG experience will need to look elsewhere as Forspoken is an action game at its core.

The open-world role-playing game is packed with downright terrifying enemies, such as deadly monsters called mutants or the epic aunty boss fights. The gameplay always remains engrossing as Forspoken requires you to find unique ways to combine your magic and parkour in order to defeat these formidable foes. For example, if you want to slow down combat, you can use Bind to freeze enemies by summoning tendrils to wrap their legs. While combat is frantic, players can get creative by chaining the defensive, offense, and parkour magic trees together.

The biggest downside to this design is that combat can feel too hectic. In a moment you’ll feel like a badass when you pull off the perfect combo with style. But a few minutes later you might fall flat on your face as the juggling act of dashing around with flow while trying to chain your Magic trees can be overwhelming.

Forspoken is packed with activities and side quests scattered across the map. After reaching Chapter 3, Athia will open up and give you a plethora of optional quests. In each town you will find NPCs with story-based missions leading to items and experience points. Mini-quests, called detours, are of course also integrated into the map; These range from collecting specific items to killing groups of enemies that have overrun a specific location. As the game is anchored by its parkour gameplay, every nook and cranny of Athia can be climbed and explored, where chests and rare items are hidden, and players must spend hours to fully complete the game and its map. The problem is that most of the site content is not exciting. Either the stories associated with it are superficial, or the rewards themselves aren’t worth it.

An NPC quest may require you to walk around for 30 minutes to lead to a few experience points. However, you can get the same experience by talking to a new character you’ve never met before or doing a basic activity. Another example is detours, which often have no story attached at all and offer you minimal reward at best. One of the first, for example, has you following a cat in a circle for a handful of EXP that you could earn elsewhere in a matter of seconds.

While Forspoken is packed with an overwhelming amount of content, its open-world design leaves a lot to be desired. I found the world design to be Forspoken’s weakest element and a distraction from its excellent story. Given the rich narrative, it would have been fascinating to learn more about the citizens of Athia and the lore behind The Break that plagues the land. With games like The Witcher 3 raising the bar with complex side quests, open-world side missions that offer little plot no longer cut it.

The best thing about Forspoken is its story. Luminous Productions has developed an engaging narrative that will quickly connect you emotionally with Frey Holland. Since we first experience her real hardships in New York City, this lends more thematic weight to the journey she embarks upon being cast in Athia. As the storyline reflects the struggles she faces in both worlds, her character development meant more to me as her adventures rescuing Athia also prepared her to face the challenges she faces at home. As the main character of the genre, Frey brings a breath of fresh air. Instead of the typical fantasy RPG protagonist of royal descent or who happens to be unique for plot reasons, Frey is a scrappy heroine trying to find a place where she belongs.

Then there’s Cuff, Frey’s magical, talkative bracelet companion that tangles on her arm. Their relationship is incredibly endearing as both fish-on-water heroes are equally perplexed by each other’s worlds. But the duo work together as they offer a unique perspective rarely seen in fantasy RPGs. Unfortunately, Forspoken follows a similar path to Final Fantasy XV, where the story changes abruptly in the second half before coming to a quick conclusion. The game’s main narrative can be quickly overtaken by players who only focus on the story. And while it doesn’t have to be longer than 40 hours, the plot does feel rushed towards the end. While I wish Frey’s adventure was more fleshed out, it’s still Forspoken’s strongest aspect.

Forspoken is awesome and sure to be one of the best looking titles of 2023. Luminous Productions has created a huge open world with frantic gameplay that also looks beautiful in action. Every character looks stunning in motion, especially Frey who is incredibly expressive throughout the story. While the world of Athia could have used more variety in terms of setting, the world is incredibly clean. The special effects used in spells also look beautiful in 4K, especially with ray tracing enabled. I can only imagine how good Forspoken will look on the best PC rigs as it’s already impressive on console.

Forspoken has one of the best protagonists the genre has seen in years, making it a shame that Frey’s emotionally rich story is sometimes let down by the game’s bland open-world design and uneven campaign. Still, Forspoken’s breakneck speed gameplay is a lot of fun and a fantasy adventure well worth embarking on.

We received this code from Square Enix for review purposes.

For more information on Forspoken, see the Forspoken Preorder Guide – All Bonuses and Editions here on Pro Game Guides.

https://progameguides.com/forspoken/forspoken-a-refreshing-fantasy-rpg-held-back-by-its-open-world-design/ Forspoken Review: A refreshing fantasy RPG held back by its open-world design

Rita Simons, 47, reveals she has had a hysterectomy

How to recruit Staunton Vhane in Pathfinder: Wrath of the Ri Right