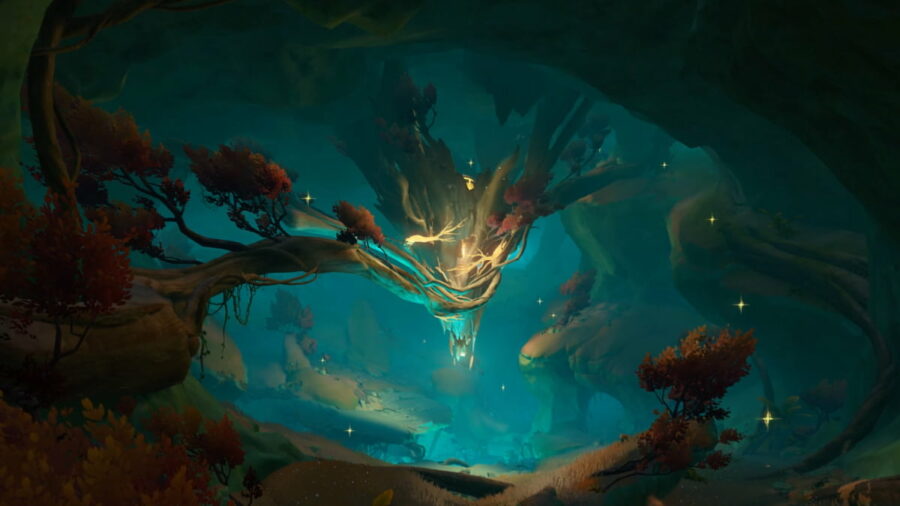 Vimana Agama: Dev Delver is the final world quest in the Vimana Agama quest line, which involves destroying the core of the giant Ruin Grader hidden beneath underground ruins.

In order to unlock the Dev Delver Chapter, you must first complete the following requirements from the Vimana Agama World Questline:

Once they finish, the Vimana Agama: Dev Delver chapter will be unlocked automatically.

You must exit the Ruins Golem by teleporting there Devantaka Mountain Statue of the Seven, then slide to the quest marker where you will find a glowing dot. Go to the inner part of the giant arm – where the arrow is pointing in the image above – to find the entrance to a cave. Enter it to stimulate dialogue with Ararycan.

Once that’s done, go further in and slide down, but don’t go all the way down. Around in the middle through, look Behind You and you will find an entrance with a glowing dot inside. Then head to the Four Leaf Seal on the opposite platform where you will find a hidden teleport waypoint to his left. Activate it to make it easier for you to return to the area later.

Follow the quest marker and continue exploring the cave. After the dialogue with Ararycan, you must defeat three groups Mage of the Abyss, whose locations are highlighted on the mini-map and world map. Remember they are everything in the caveso don’t teleport above ground.

Use the four-leafed sigils from the area in the mini-map above to move to the core in the center. Be careful as you have to defeat one Electro Abyss Herald, so prepare a shieldbreaker in your team. After the fight, use the same four-leaf sigils to return to and interact with the core Turn off the device.

once that’s done, teleport the cave and follow the quest marker to Ararycan’s location. After speaking to him, complete the Vimana Agama World Questline and unlock the Wonder of the World achievement called …Let me fade away with the memory.

Check out our Genshin Impact The Final Chapter World Quest Guide – Agnihotra Sutra for another requirement for the Utsava Festival.

The Health Secretary is told frontline workers believe the NHS has "collapsed".

How to add and invite friends in Modern Warfare 2