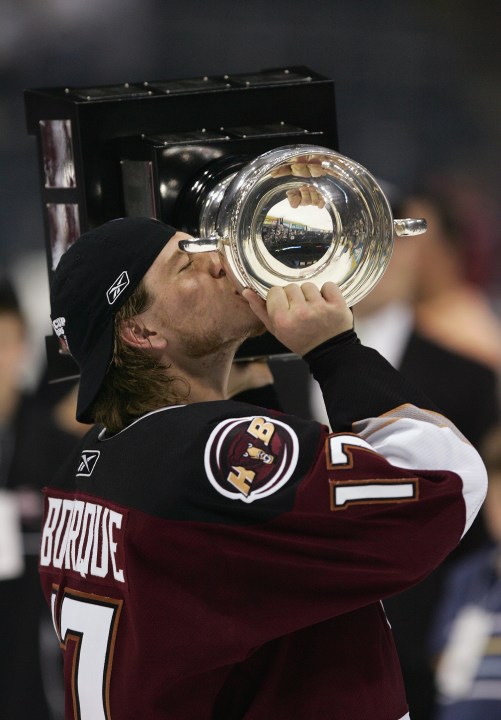 HERSHEY, Pa. (WHTM) – The Hershey Bears will retire Chris Bourque’s #17 jersey, which is only the eighth Bears player to retire his jersey.

Bourque played nine seasons at Hershey and won three Calder Cups with the team in 2006, 2009 and 2010. He ranks fifth all-time in the all-time goalscoring chart for the franchise, which dates back 85 years.

Todd Nelson named the Hershey Bears as their next head coach

“It’s such a happy place,” Bourque said. “You just get a good, warm feeling when you come back to Hershey. I have very fond memories of how everything kind of comes back when you drive in. It’s such a special place to play and playing at this rink never really got old.”

Bourque will become the eighth player in franchise history to have his number retired, the Bears’ first shirt retirement since 2002.

Where do the cuddly toys go after the teddy bear toss?


“Some legendary players who played here,” Bourque said before Saturday. “It’s an honor to be recognized as a player who will have my number up there with these guys.”

The ceremony will take place prior to the Bears vs. Springfield game on Saturday, January 14 at 5:45 p.m. at the Giant Center.

The first 10,000 fans in attendance that night will receive a Chris Bourque mini banner. The mini-banners are replicas of Bourque’s #17 banners that will hang from the rafters of the GIANT Center.

Scott Allen reflects on time at Hershey after promotion


The Bears want fans to know that doors will open at 4:45 p.m. to allow for the early and extended celebration of Bourque’s career.

The British economy grows slightly in the second quarter

A nuclear attack would cause “political destruction for Russia,” says a foreign aid worker

A biennial World Cup is dead, but FIFA’s fight isn’t over

Boris Johnson’s Partygate is about the economy