A manhunt is underway after two men were caught by CCTV setting fire to a family’s brand new £20,000 food truck business.

Sharon Jolley, who launched the company during lockdown in Wigan, Greater Manchester, with her husband Mike, 53, said she was “traumatized” by the attack.

The family say they “need justice” after the incident, which took place at around 11pm on September 14 at Rosebridge Court in Ince.

Shocking CCTV footage shows the moment two yobs on bicycles approach the blue truck while wearing hoodies and masks to hide their identities.

One can be seen smashing the passenger-side window before dousing the front seats with a flammable liquid.

Meanwhile, the other thug can be seen pulling pieces of white cloth out of his pocket, which he then douses with a liquid before setting it on fire.

There appears to be a massive burst of flame, causing both men to initially run from the scraps of cloth as they lay on the burning floor. 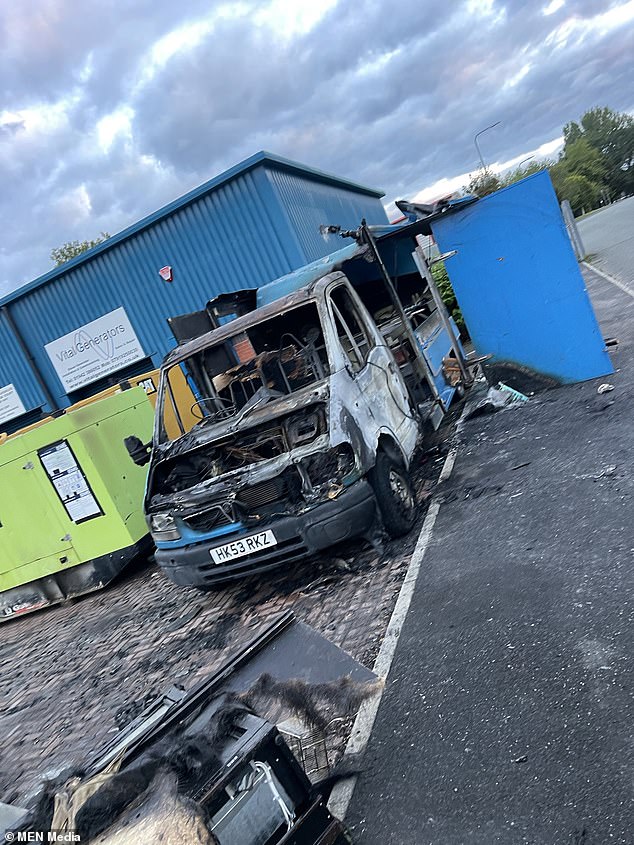 Sharon Jolley, who launched the business during the lockdown in Wigan, Greater Manchester, with her husband Mike, 53, said she was “traumatized” by the attack (Pictured: After the attack it is revealed that the food truck was completely destroyed by the inferno).

However, the vandals pick them up again and throw them in the food truck. The vehicle immediately bursts into flames as the thugs scurry from the scene on their bicycles.

The family that owns the truck, which was just starting to turn a profit, is now urging police and the public to find the culprits.

“My wife’s business has gone down the drain, we don’t have the money to buy another food truck and these people are still walking around.

“My wife is traumatised, the food truck was a new venture that started at the start of lockdown. It was making halfway decent money, and we’ve lost all that now.

‘She lost her business, it’s gone, that’s it. We’re not looking for sympathy or anything like that, we just need justice.”

A thug can be seen on CCTV pulling pieces of white cloth out of his pocket, which he then douses with a liquid before setting it on fire

A spokesman for Greater Manchester Fire and Rescue Services said: “At around 11pm on Wednesday 14 September firefighters were called to reports of a vehicle fire at Rosebridge Court in Ince.

“A Hindley fire engine was quickly on site where they discovered a fire involving a catering van in a car park.

“Firefighters stayed at the scene for around an hour before handing them over to colleagues from Greater Manchester Police.”

Greater Manchester Police told MailOnline they had not yet made any arrests but the investigation was continuing.

How to complete all Skywalker week quests in Fortnite