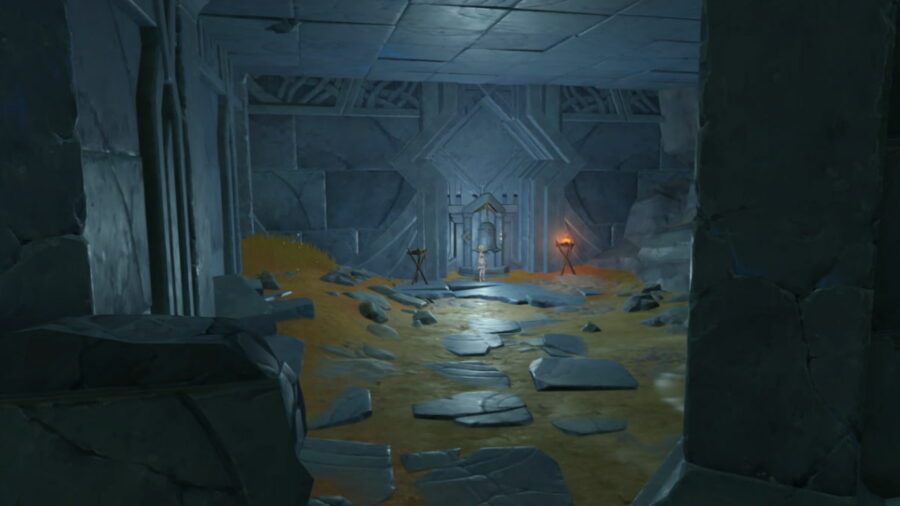 Perils in the Dark is the fifth part of The Chasm Delvers World Questline. It picks up where The Heavenly Stone’s Debris left off. From the Stone Halls, follow the quest marker to the Nameless Ruins to investigate the Dark Mist.

You will find a glowing investigation point with Oozing Concretions in front of it. Use the Lumenstone adjuvant (at least level 2) to remove and reveal the dark spots Fatuus’ diary. After reading it, you will be asked to ring the two bells on either side of the ruins.

Follow the quest marker to the quest area south of the underground waterway. Head to the teleport waypoint, where a door guarded by a shell of shadow will automatically open and let you through.

From there, follow the quest marker to the huge ruin and climb up. Once you climb the vines you will find a small hole to go through. ignore it and go the other way that allows you Climb to the top of the ruin.

Related: How to complete The Missing Miner World mission in Genshin Impact

First you must defeat the two Abyss Mages that prevail. Then, Charge the plant up front with the Lumenstone Adjuvant – this consumes three energy. This causes purple stones to appear.

Successfully shooting any of the mechanisms or purple bricks will set off a chain reaction that will affect similar nearby structures. After unlocking all mechanisms and removing all purple bricks, the bell on the other side of the clearing will unlock. attack it to trigger a cutscene to play and complete that part of the quest.

Related: How to complete A Company Vanishing into the Deep World quest in Genshin Impact

Follow the quest marker to the ruin guarded by a ruin grader. Defeat it and keep moving forward. Your goal is to reach one floor below the top of the ruins, as this is where the puzzle begins.

First, Remove the oozing concretion in space to reveal a diamond stone structure, making four in total. They must be illuminated by activating a light source next to them. Focus your attention on the three in the room.

The first is easy: Charge the mechanism next to it, which will serve as a source of luminosity. The other two need to be lit using the two Seelies in the room.

This part is a bit tricky. If you lead the seelies, they will always eventually overlap and will never land in front of two unique diamondstone structures if they move at the same time.

Your goal is for both seelies to overlap, and then Just move the seelie closer to the structure while the second Seelie is forced to stay in place. That means you have to approach the front seelie carefully so that the rear one isn’t asked to move. It may take a few tries to get it right.

You should end up with two Diamond Stone structures with a Seelie in front of them, and the third one will be lit by the mechanism next to it. Then go outside and approach the fourth diamond stone structure. Your Lumenstone adjuvant will light it up and complete this piece of the puzzle. You will be rewarded with a precious chest.

After that one wind stream will appear. Use it to propel you to the top of the ruin. Guide the Seelie to the unlit diamond stone structure that unlocks the mechanism between them. Interact with the mechanism to open the gate that leads to the floor below.

Make sure to run the Seelie down to get an Exquisite Chest. You will also be greeted by a Ruin Grader and Oozing Concretion. Remove the dark mud and Defeat the Ruin Grader to reveal the second bell. attack A cutscene will trigger, completing the puzzle.

After ringing the two bells, return to the Nameless Ruins with a battle-ready team that can Break Pyro and Electro shields. You will be asked to defeat Pyro and Electro Abyss Lectors. After the battle, interact with the glowing investigation point on the ground to get the Curious Cube, completing the world quest. You will also get the title “Wonders of the World”. Birth pangs of the Dark Mist.

If you haven’t met the requirement for this world quest, check out our How to Activate Mechanisms – The Heavenly Stone’s Debris World Quest in Genshin Impact guide to help you out.

https://progameguides.com/genshin-impact/how-to-complete-the-perils-in-the-dark-world-quest-in-genshin-impact/ How to complete the Dangers in the Dark World quest in Genshin Impact

Raiders Named Among The Best Suits For QB Cam Newton

How to play Splatoon 2 offline

Is Dragon Ball: The Breakers cross-platform/cross-play?