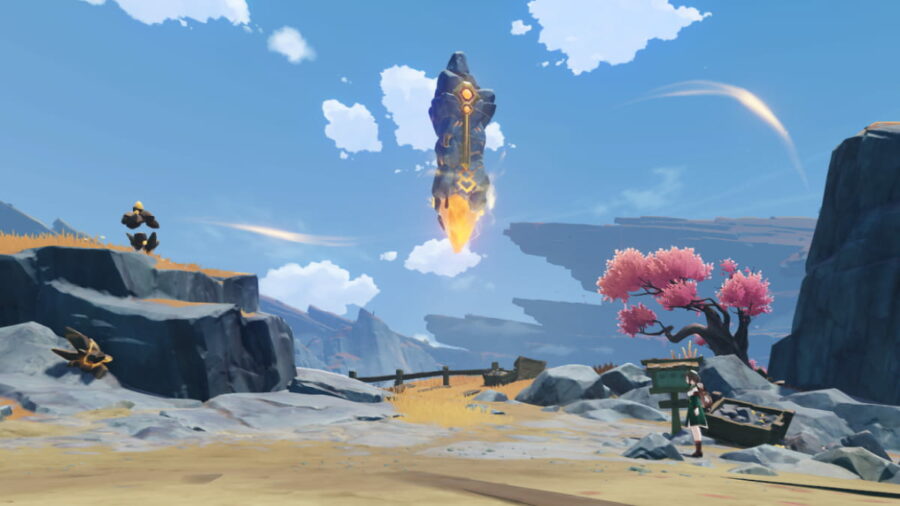 In the world quest Securing Seal Separation of the Seven Stars, you must disable bedrock keys – seals placed by the Liyue Qixing to prevent outsiders from entering the Abyss. Destroying them requires the help of a Geo Damage dealer or a Claymore userso make sure you have both on your team.

There are four bedrock keys to destroy that Zhiqiong will guide you in completing, and three of them live deeper in The Chasm.

How to Destroy Bedrock Keys

There are two considerations to remember. First the projectile must be fired towards Bedrock Key. So when attacking the geo-formations, keep in mind the location of the bedrock key, otherwise the projectile will fire in the wrong direction.

Second, Geo Formations only fire projectiles at a straight line. Each time a projectile successfully hits the Bedrock Key, it will drop down a bit. This means you have to attack the geo-formations based on theirs vertical positions to correctly align the projectiles with the bedrock key.

Related: Where to get Elegy for the End in Genshin Impact

Bedrock key locations and how to destroy them

After destroying the first bedrock key with Zhiqiong, you’ll need to find the other three yourself. The quest markers will guide you to the exact locations of the puzzles. Their positions have also been marked in the image above – they can be completed in any order.

The Geograna can be placed in any order in the Geo-Formations. Use the elevators to reach the geo formations suspended in the air.

Refer to the image above for those exact order fire the projectiles. Start with the highest geo formation and end with the lowest in the hut. Bedrock should sink every time a projectile is fired. If not, then check the direction you are attacking from.

Related: Many Genshin Impact players try (and fail) to sneak into Inazuma

The Geograna can be placed in any order in the Geo-Formations. Use the wind flow in the middle of the canyon to navigate the area.

Refer to the image above for the order of attacking the geo formations, but remember that the The second geo formation must be attacked twice this also lowers the Bedrock Key by two levels. Otherwise, the projectile of the third geo-formation cannot reach them.

The Bedrock Key in Fuao Vale is a bit difficult to find as it is not in the exact location of the quest market. search for Teleport waypoint in the interface and use it as your guide. The cave to their right leads to the location of the bedrock key.

Like the first two, the Geograna can be placed in any order in the geo-formations. Refer to the image above for the order of attacking the geo formations. Remember that the third is in the water area below.

You will know the Bedrock Keys have been successfully destroyed when a cutscene plays after completing each one.

For more Genshin Impact news, guides, and updates, be sure to check out the Pro Game Guides.

Erika Jayne confronted by fans as a 'joke'

How to Get and Play Ollie in Dislyte – Ollie Guide

Where is Logjam Junction in Fortnite?

What items to buy from Twin Maiden Husks in Elden Ring?

How to unlock bus signs in Bear and Breakfast