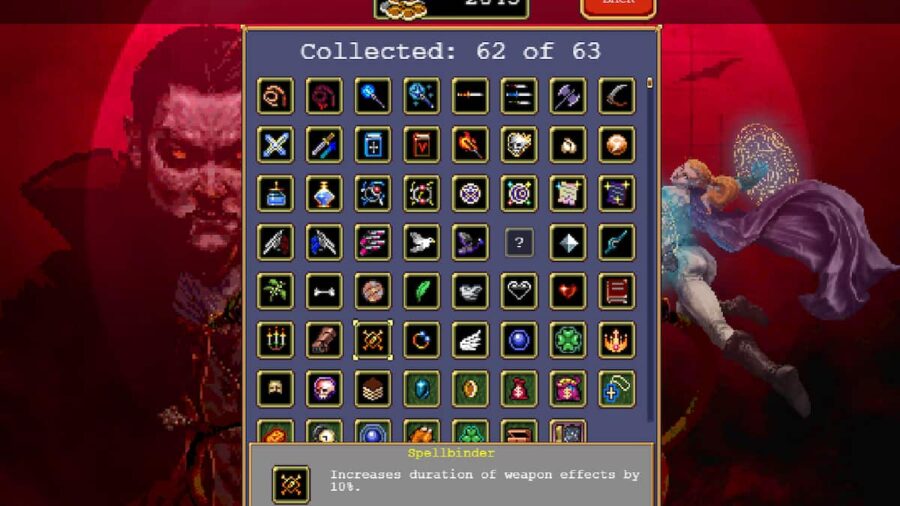 To unlock the Spellbinder in Vampire Survivors you must level the runetracer to level seven on a single run. The best way to do this is to pick Pasqualina Belpaese since she starts out with the Runetracer as her main weapon. This way you can easily get it to level seven.

Related: How to evolve and combine weapons Phiera Der Tuphello and Eight The Sparrow in Vampire Survivors

Once you unlock the Spellbinder, you can find it as a passive item during runs. The Spellbinder has five tiers, each increasing the duration of weapon effects by 10%, up to a total of 50%.

The Spellbinder is also the evolution requirement for the King Bible. If you get the King’s Bible to level eight and have a Spellbinder, the next chest you unlock will contain the evolved weapon, the Unholy Vespers.

However, Spellbinder has good synergy with other weapons affecting Sant Water, Song of Mana, Peachone, Ebony Wings, Runetracer, Clock Lancet, Bone, and Cherry Bomb. It also affects all advancements of these weapons.

Why Kareem Abdul-Jabbar isn't impressed by Will Smith's Oscar slap