Madelyn Allen is a missing student from Snow College, located in Ephraim, Utah.

“Investigators continue to uncover all leads in the Madelyn Allen case,” Snow College wrote in a statement on its website.

“Officials from multiple law enforcement agencies are meeting regularly to coordinate efforts. Police continue to ask the public for help and advice in finding Maddie. Finding Maddie remains the main goal. Proof that Madelyn has left the area of ​​Ephraim. She has no access to a car nor a driver’s license and will not be able to get around on her own. Madelyn’s current mental state, as shared by the family in a press conference on December 16, adds to the anxiety and urgency in finding Maddie.”

In a press conference, the president of Snow College describes how people are “sincerely worried” about Allen.

1. Allen was last seen leaving her dorm on December 13

The statement read: “Snow College Public Safety is working with local and state law enforcement as well as the FBI. Police are asking anyone who has been in the area and seen anything suspicious to contact them at 435-283-7170. Anyone with information about Madelyn’s whereabouts is also asked to contact police. For media questions, please call Snow College PIO Marci Larsen at 435-851-1230. ”

What is Snow College? “Snow College, founded in 1888 by Utah pioneers, is a two-year college with campuses located in Ephraim and Richfield, Utah. Serving nearly 6,000 students, the school has been recognized nationally for its student success rates, reasonable cost for value, exceptional teaching and engagement opportunities.” Its website says.

Police said they don’t know where she went or if she was with anyone else. They tried to track her cell phone.

2. The Allens said, ‘Our one and only priority is to locate and bring home our Madelyn’

In a statement posted on the university’s website, the family said on December 16, 2021:

“Our first and only priority is to locate and bring home our Madelyn. We are following the guidance of authorities, including the Snow College Police Department, multiple county law enforcement agencies, and the FBI. We sincerely appreciate their coordinated efforts and expertise. ”

The statement continued, “We will make every effort to find our Madelyn and we are looking at every possible resource and strategy to reunite her. We know that the media and good people everywhere want to help, and we express our deep gratitude to Snow College, their public safety team, the responsible members of the media. responsibility and many friends, family and acquaintances extended their love and prayers. ”

Her father Jonathan Allen said in a press conference. “Of course, we’re devastated, as you can imagine, and we’re desperate to find her safe.” He praised the efforts of law enforcement and the school.

The Facebook page says, “Madelyn (Maddie) Allen went missing at 9:22 p.m., Monday, December 13 in Ephraim Utah. We need to find her and we need your help.”

The page features a family photo of the Allens, which reads: “This beautiful family needs your continued love and prayers. Thank you for all you’ve done to share — it’s important that we move on. ❤️”

4. Authorities have released a video showing Allen leaving her dorm

Authorities released a 17-second video (above) that shows Allen leaving her dorm, wearing a white coat and a bag in hand. According to KUTV, that video shows her leaving the dormitory at 9:22 p.m. and authorities believe she took her cell phone with her.

The family’s Facebook page says: “Maddie has always been a fighter — and it’s time to get to know her story better. Here, she’s telling it in her own words (about applying for a scholarship before being admitted to Snow College). Please share this post and encourage others to do the same. ❤️”

“My parents always called me a boxer,” Allen said in that video, in which she revealed that she weighed only a pound and a half at birth and endured countless doctors and therapy appointments that made her develop “severe anxiety” about many things. , including schools and “new locations”.

However, she says she “finds joy” in things like baking, dancing, music and travel, and that she auditioned for a musical in high school.

5. Maddie’s dad says she has consistently overcome obstacles in her life 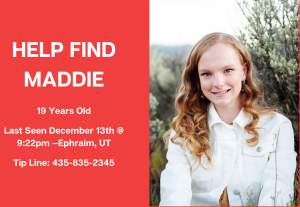 Allen was born with a brain bleed and faced numerous challenges, her father said. He said she was born prematurely at just 26 weeks. She has struggled mentally and emotionally but has “consistently overcome many of these obstacles,” he said, adding that she loves art and music.

“We believe she is facing a major mental health crisis, and she needs our help, and we need to find her,” her father said at a press conference. .

“Dear Maddie, if you can hear us, you are not alone. Many people are facing similar challenges, and have faced challenges like this one. We know that you are brave and you are strong. We see you and we love you beyond our ability to express.”

Mayors, CEOs and Non-VIPs Are Testing Positive for COVID As Omicron Rates

Oregon vs Oklahoma live stream: How to watch it for free