The Wall Street Journal reported last week that the company, formerly known as Facebook, is “taking remote work to the extreme” in its executive positions, with several executives planning global relocations and others, including Chief Executive Officer Mark Zuckerberg, planning longer periods to work the time away from the company’s Silicon Valley headquarters.

The company said in June it would give most of its employees the choice of applying for permission to work outside the office. Meta says its goal is to be “the most progressive remote work company” of its scale and believes it could have tens of thousands of people working remotely in the future.

Online real estate giant Zillow Group was exceptionally early in adopting a permanent home office option, announcing back in July 2020 – just months after the pandemic began – that 90% of its employees would have the option to continue working from home at least indefinitely at home. As part of its new “distributed workforce” model, Zillow says it now has employees in 49 states.

Zillow is a much smaller company than Meta, with a local workforce rather than a global one, but its early remote-working lessons could be helpful to Meta investors. In an interview, Chief People Officer Dan Spaulding said Zillow’s decision to move to a more flexible workforce model had to do with attracting and retaining the best talent. Even before the pandemic, he said asking candidates to uproot their family and move to Seattle, where Zillow is headquartered, “was a really difficult proposition,” adding he “can’t imagine” the Convincing people to change jobs and move into today’s job market.

Zillow says the number of applicants increased by more than 58% in the first half of 2021 compared to the first half of 2019, with an increase in diversity among applicants. In surveys in 2021, the company said nearly half of its new hires chose Zillow because of its “freedom and flexibility.”

Meta could use some of that boost, especially at the top. Senior executives, including the head of communications, the global head of advertising, the head of the Facebook app, the co-creator of its digital currency, the vice president of virtual reality, the vice president of augmented and virtual reality content and its chief creative officer, among others, have left the company in the last 15 months. Meta’s stock — a key element of executive compensation — is looking a lot less attractive these days, having since declined nearly a third year and lost roughly $300 billion in market value.

But Mr. Spaulding cited the faster pace enabled by remote work as both an advantage and a disadvantage. He said it enabled Zillow to get through his iBuying deal quickly. Rapid adoption over the past year resulted in hundreds of millions of inventory write-offs in a single quarter. Mr Spaulding said he didn’t know if iBuying’s explosion could have been avoided with a more centralized workforce, however.

The first word on what Wall Street is talking about.

Meta says it’s too early to share data on how many of its employees have chosen remote work as an option, but said 2022 will be “a year of learning.” A company long known for its mantra of “move fast and break things” is now striving to make rapid progress as it works to extend its social media roots into what it calls the “metaverse,” a highly competitive realm To stretch that counts Microsoft and Nvidia as competitors.

In an interview for Tim Ferriss’ podcast published last week, Mr. Zuckerberg cited “the rise of distributed work” as perhaps the most significant societal trend he sees right now. He also spoke about his company’s core values ​​over the years, such as: B. Leveraging the things you build for quick feedback. Moving fast, he said, is the key to learning; but implicit in this is tolerance for “a certain amount of error.”

Sometimes these bugs bite. To assess the promise of remote work, Ben Waber, president and co-founder of workplace analytics firm Humanyze, examined the pandemic performance of public video game companies worldwide — an industry for which he emerged as an “ideal test case” for success in a fully distributed workforce given the popularity of the pandemic and the production of almost exclusively digital goods like that of Meta. In the end, he and Zanele Munyikwa, a Ph.D. A student at MIT’s Sloan School of Management, found that public video game companies that switched to remote work during the pandemic reported 4.4 times more delays than before the pandemic, while those that didn’t switched to remote work compared to about half of the delays reported before the pandemic.

“Now nobody can pretend they know what they’re doing,” he said at the time of post-pandemic workplace regulations. “To Meta, if they’re being honest, it’s a hypothesis.”

It’s a particularly high-stakes hypothesis for a company that is now urging investors to invest in building a virtual environment in which it expects the world to not only play and communicate, but work. In that sense, Meta’s bet on remote work is a crucial proof-of-concept.

write to Laura Forman at laura.forman@wsj.com

https://www.wsj.com/articles/mark-zuckerberg-is-away-from-the-office-11648638180?mod=rss_markets_main Mark Zuckerberg is out of the office 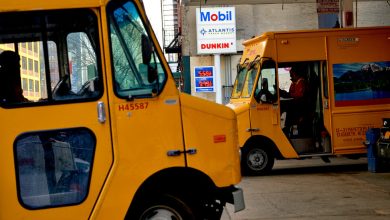 Rising diesel costs are rippling through the global economy

The best fitness apps to exercise at home