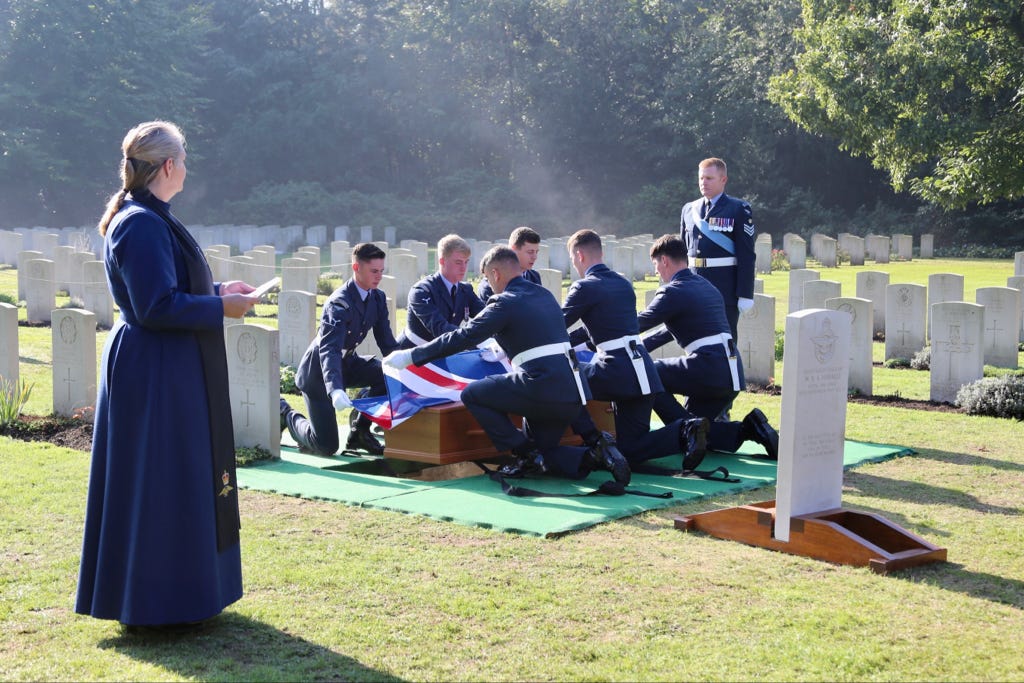 A number of ceremonies have taken place to commemorate the victims of Royal Air Force (RAF) airmen who died during the Second World War.

A series of full military funeral services organized by the Ministry of Defense buried several men at Jonkerbos War Cemetery in the Netherlands this week.

Among them was Flight Sergeant William Robert Stephen Hurrell, whose remains were buried 78 years after his death in action.

He was killed when his RAF Typhoon was hit by an enemy aircraft over Arnhem in September 1944.

His remains were discovered in 2019 after Dutch authorities excavated the crash site on farmland near the village of Eefde, Lochem.

He was flying in a formation of six aircraft in an armed reconnaissance north of Arnhem when they were attacked by up to 60 enemy fighter planes.

The service was attended by members of Flt Sgt Hurrell’s family, who had traveled from Australia, representatives of the RAF, the British Embassy in the Netherlands and dignitaries from the Lochem community.

The remains of an airman were also buried at another ceremony.

Tracey Bowers of the MOD said: “It has been an absolute privilege to arrange this ceremony for Flt Sgt William Hurrell and I am grateful for the help from the community of Lochem.

“I’m honored to stand alongside his military and blood family to pay him this final tribute.”

His great-niece Brydie Hurrell said: “We grew up knowing that Bill was shot down at the end of the war and that his parents never found him. We knew he was in the Netherlands – we just weren’t sure where exactly.

“When we heard about the salvage project, we were overjoyed. Representing the rest of my family at home means a lot to me.

“Bill’s parents and his brother, my grandfather, died not knowing where he was, but we know there is closure for them and for us.”

On Wednesday, the RAF and Royal Canadian Air Force also held a joint ceremony for the seven-man British and Canadian crew of Stirling BK716 No. 218 (Gold Coast) Squadron.

After leaving Downham Market, Norfolk, for a raid on Berlin on March 29, 1943, their flight was reported “missing, presumed killed”.

The crash site was later located in Lake Markermeer and in 2020 the remains were removed.

Liverpool-born RAF aviator John Stuart Mee Bromley was also buried near Dordrecht, 82 years after his plane was shot down.

A blessing ceremony was also held at Idaarderadeel (Wartena) General Cemetery for Pilot Officer Peter Clement Vellacott Joslin of Hornchurch, who died when his Lancaster bomber crashed in September 1942.

https://www.newschainonline.com/news/remains-of-raf-airmen-who-died-during-ww2-buried-during-ceremonies-295326 Remains of RAF airmen who died during WW2 were buried during ceremonies