Rogel Aguilera-Mederos is a semi-truck driver who was sentenced to 110 years in prison in Colorado for a fatal accident that killed four people along Interstate 70.

A petition drive urging Colorado’s governor to grant Aguilera-Mederos, then 23, a sentence commutation or clemency has been signed by more than 4.2 million people as of December 19, 2021. His full name is sometimes given as Rogel Lazaro Aguilera-Mederos.

In addition, the hashtag #NoTrucksToColorado is trending on TikTok, Twitter, and Facebook, as truckers say they will not travel through Colorado as a result of the sentence, which many people believe to be extreme. “Me and my brother have decided that we (Brown Eagle LLC) have joined the protest and are not getting any loads out of or to Colorado until Rogel gets justice cause 110 years is ridiculous. The company should be held accountable!” wrote one trucker on Twitter.

Me and my brother have decided that we (Brown Eagle LLC) have joined the protest and are not getting any loads out of or to Colorado until Rogel gets justice cause 110 years is ridiculous. The company should be held accountable! pic.twitter.com/1dtzaN6mfU

People have posted videos to TiKTok on the trucker boycott.

“We are aware of this issue, the Governor and his team review each clemency application individually,” the Colorado governor’s office told 9News.

1. The Judge Said Mandatory Minimum Sentencing Laws Gave Him No Choice Over the 110-Year Sentence

A Colorado judge A. Bruce Jones sentenced Aguilera-Mederos to 110 years in prison, which is effectively a life sentence, for the crash, which occurred when Aguilera-Mederos’s semi-truck rammed into stopped traffic in April 2019.

According to Freight Waves.com, his truck “lost its brakes coming out of the Rocky Mountains.” He could have used a runaway truck ramp but instead rammed into the stopped traffic, causing a 28-vehicle crash. In addition to the four who died, six people were wounded, and a fire broke out, the site reported.

During the sentencing, the judge said that Colorado’s mandatory minimum sentencing laws forced the sentence. The law required him to issue consecutive sentences, according to 9News.com.

“In all victim impact statements I read, I did not glean from them someone saying, ‘He should be in prison for the rest of his life, and he should never, ever get out,” Jones said, according to 9News. “Far from it. There was forgiveness reflected in those statements, but also a desire that he be punished and serve time in prison, and I share those sentiments.”

Domingo Garcia, the national president of LULAC, a Latino civil rights organization, told the Denver Channel that the sentence was not just and blamed the district attorney, Alexis King, for filing so many charges. As a result of the number of charges filed, the consecutive terms added up to a life sentence.

“This case is so egregious,” Garcia said to the television station. “It boggles the mind that here we are in 2021 and that somebody who was not intoxicated, not on drugs… It’s an accident, the brakes went out. But here’s the Latino driver, he gets charged, convicted and given 110 years of prison on his first offense.”

The DA has defended the prosecution.

King told The Denver Channel in part, “We initiated plea negotiations but Mr. Aguilera-Mederos declined to consider anything other than a traffic ticket. The facts and consequences of his decisions that day were extraordinary enough to support pursuing first-degree assault charges. Ethically, we do not – nor can we – pick and choose between victims in charging. The jury’s thoughtful verdict reflects the strength of the evidence presented and recognizes the harm caused to the victims. The sentence – which our office requested the minimum for – is within the purview of the court and reflects the judgment of the legislature. Just as the law mandates this outcome, it also provides future opportunity to revisit the sentence, and we will again pursue an appropriate outcome if that opportunity arises, after consulting with the victims and survivors and receiving their input.”

The former DA Peter Weir filed the charges, according to Westword.

According to Westword, the defense argued that his truck had multiple mechanical problems. When his brakes failed, Aguilera-Mederos testified that he considered but ruled out other options, worrying he would “wind up in the path of oncoming traffic on the other side of the highway” or cause an explosion if he crashed into a bridge. He swerved to slow down.

The Denver Post reported that Aguilera-Mederos tried to flee the scene.

2. More Than 4.2 Million People Have Signed a Petition to Get Aguilera-Mederos a Sentence Commutation 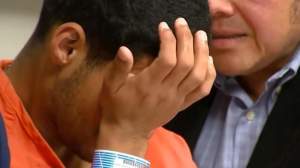 There is a major petition drive to help Aguilera-Mederos that has been signed by 4.2 million people.

“We all know of the crash that happened on I-70 in Denver, Colorado. Most of us have heard facts in the case. Rogel Lazaro Aguilera-Mederos, 23 has nothing on his driving record, or on his criminal history. He had complied with every single request by the Jefferson County courts, and investigators on the case,” the petition says.

“He’s passed all of the drug and alcohol tests that were given including a chemical test. This accident was not intentional, nor was it a criminal act on the drivers part. No one but the trucking company he is/was employed by should be held accountable for this accident.”

It continues: “No, we are not trying to make it seem any less of a tragic accident that it is because yes, lives were lost. We are trying to hold the person who needs to be held responsible, responsible. The trucking company has had several inspections since 2017, with several mechanical violations.”

They added, “There are many things Rogel could have done to avoid the courts, but he took responsibility showed up and severely apologized to the victims families. Some of the families even offered Forgiveness. Rogel is not a criminal, the company he was working for knew the federal laws that go into truck driving but they failed to follow those laws. Rogel has said several times that he wishes he had the courage to crash and take his own life that day, this tragic accident wasn’t done with Intent, it wasnt a criminal act, it was an accident. Since he has been sentenced, i have changed this to granting Rogel clemency or commutation-as time served.”

3. Aguilera-Mederos Told a Television Reporter He ‘Cries All the Time’ Over the Crash

Aguilera-Mederos spoke to a reporter with CBS4 from the local jail. “I am crying all the time, I think about it and I have flashbacks,” he told journalist Rick Sallinger before he was sentenced.

He told Sallinger he tried to avoid the vehicles. “My life is not a happy life. It is a very sad life because four people died,” he said in that interview.

The station reported that he could have pulled off a runaway truck ramp, but explained, “When you lost your brakes, your mind is blocking.”

During his sentencing hearing, he also showed great remorse. “I have never thought about hurting anyone in my entire life,” he said, according to 9News.

4. The Judge Will Have the Ability to Review the Sentence for Aguilera-Mederos, a Cuban Immigrant Who Lived in Texas

The Spanish-language site ADW America says Aguilera-Mederos is Cuban and lived in Texas. Westword reported that he was a Cuban immigrant who lived in Houston.

The Denver Post reported that he is a Cuban national. He had no prior criminal record, and his lawyer said in court that he valued his life in America, according to CBS Denver.

9News Legal Expert Scott Robinson told the 9News television station that the judge has the ability to review the sentence soon.

“Colorado’s violent crimes statute gives judges some discretion after 180 days have passed,” Robinson said to 9News. “Here, the sentencing judge, Bruce Jones, will have an opportunity to determine whether there were unusual and extenuating circumstances which would justify a reduction in the sentences imposed.”

According to Westword.com, Aguilera-Mederos is indigent.

5. The Victims’ Families Have Described Their Losses as Devastating

Stanley Politano was one of four people who died in Thursday’s I-70 crash and fire. His family shared this photo of him with his wife Cathi. Stan was a well known gaming and casino developer in Colorado. #9News pic.twitter.com/pN5r6SxOrM

The victims’ families spoke out at the trucker’s sentencing. The victims were Doyle Harrison, William Bailey, Miguel Angel Lamas Arellano and Stanley Politano.

“It’s been difficult, sometimes it feels like being half a person,” said Kathleen Harrison, whose husband Doyle Harrison, died in the crash, according to CBS Local.

The website Historic Golden Colorado wrote on Facebook, “I knew Doyle Harrison. He was a County staffer that worked closely with the Jefferson County Historical Commission, one of the best I’d ever worked with. Doyle was our graphics designer and web specialist, the one who made Historically Jeffco magazine look not just pretty good but a high quality publication recognized by the state. I worked with him a lot upon the magazine, and on creating the wall of judges inside the judicial wing of the Courthouse, and on other things too. He’s the guy I’d send my impossible images to for the magazine (usually because they were the only ones that existed) and he’d make them work, or find good ones to go with stories if there weren’t any. Though he always liked me to proof my stories I rarely had any adjustments to make, and those just technical in nature. I last saw him April 1st; it’s hard to believe I’ll never see him sitting across from me again. We’ll miss him!”

“He was taken away from me in an instant by the actions of a selfish person,” Juanita Bailey, the mother of victim Bill Bailey, told the judge, about her son.

Westword.com reported that Politano, who was driving home from work, had worked in the gaming industry for more than 20 years.

Victim Miguel Angel Lamas Arellano, 24, was described by his family as a happy person with good intentions, according to 9News. A GoFundMe page to help his family raised more than $13,000.

'What matters is your family'

How can we save Ukraine

Five things we learned from England’s series win over Australia