Ronan Keating has said an emotional goodbye to his daughter Missy, 21, as she left to start a new life in Australia.

The Boyzone singer, 45, shared an emotional post on Instagram on Friday to reveal his daughter is moving Down Under to pursue her dream career as an actress.

Alongside the caption, he shared a sweet snap of his daughter Missy hugging his youngest children Cooper, five, and Coco, two. 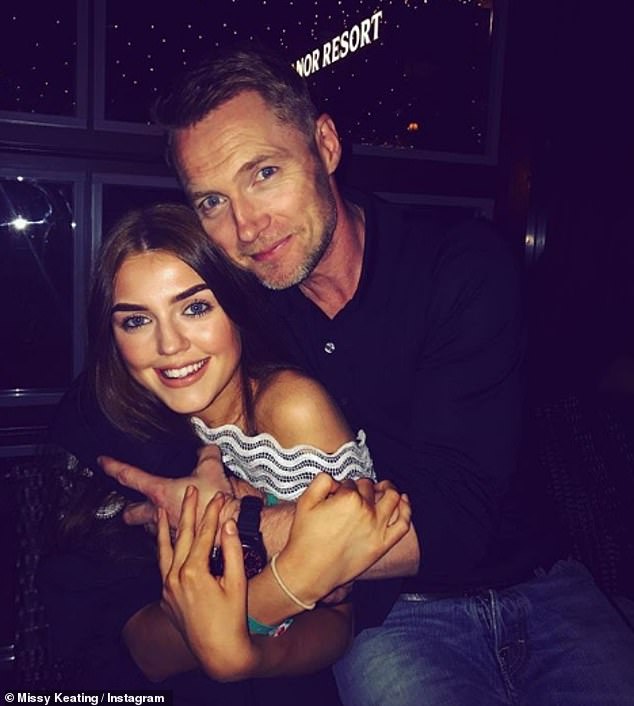 Heartbroken: Boyzone singer Ronan Keating, 45, gave an emotional goodbye to his daughter Missy, 21, as she left to start a new life Down Under

He openly admitted his “heart aches” as he and his family said goodbye to Missy, who he shares with ex-wife Yvonne Connelly when she flew away.

He wrote: “She’s leaving. Attention Australia, @missyykeating is on the way. The heart hurts so much. We will all miss her like crazy.”

The proud dad also revealed the cute nickname he has for his daughter Missy, continuing the post with, “I’m so excited for you Moo Moo.”

Farewell: And Ronan took to Instagram on Thursday to post a sweet snap of his daughter Missy hugging his youngest children Cooper, 5, and Coco, 2, as she says goodbye

Missy’s brother Jack Keating, 23, who made a brief appearance on Love Island last year, was also upset at his younger sister’s move, commenting a crying face emoji and a red heart on his father’s post.

Missy’s mother Yvonne was also heartbroken about her daughter’s departure and said goodbye to her daughter on Instagram with a sweet farewell post.

Sharing an emotional snap of the two, she captioned the post, “Before Missy moves on to the next chapter in her life we ​​need to spend the best weekend ever with her friends and family and say goodbye before she heads back to London to celebrate on her to prepare for a big move to Australia!!’

Proud dad: The proud dad also revealed the cute nickname he has for his daughter Missy, continuing the post with “I’m so excited for you Moo Moo”.

She also revealed that Missy had dreamed of being an actress for so long and claimed she was “so excited” for Missy.

“You’ve wanted this for so long, missy. What an adventure. We will miss you so much but I’m so excited for you too.’

She ended the heartfelt post with, “You are an amazing, fabulous, wild woman and will no doubt make the most of the opportunities that come your way. I love you @missyykeating.’

Missy recently opened up about her big move to Australia while speaking to Irish showbiz website Goss.ie.

She said: “I’m moving to Sydney at the end of the month. I am looking forward to.’

“I have a lot of relatives in Australia and there are some great acting agencies. I’m really excited to get out there and start a new chapter. It’s time for a new me.”

Prior to the move, Missy worked as a model and also starred in the Irish version of Dancing with the Stars earlier this year.

And during the interview, she explained her reasons for the big career change.

She said: “I’ve always enjoyed acting and have put it on hold for the past few years as there have been other things that interested me, but looking back, acting has always been what I enjoyed the most. It’s what I can hopefully envision for years to come.

Career change: The big move comes after Missy recently discussed moving to Australia to pursue her dream career as an actress

https://www.soundhealthandlastingwealth.com/celebrity/ronan-keating-bids-an-emotional-farewell-to-his-daughter-missy-as-she-relocates-to-australia/ Ronan Keating says an emotional goodbye to his daughter Missy who is relocating to Australia

Why does the inquisitor's head defecate in Tales of the Jedi? Star Wars explained