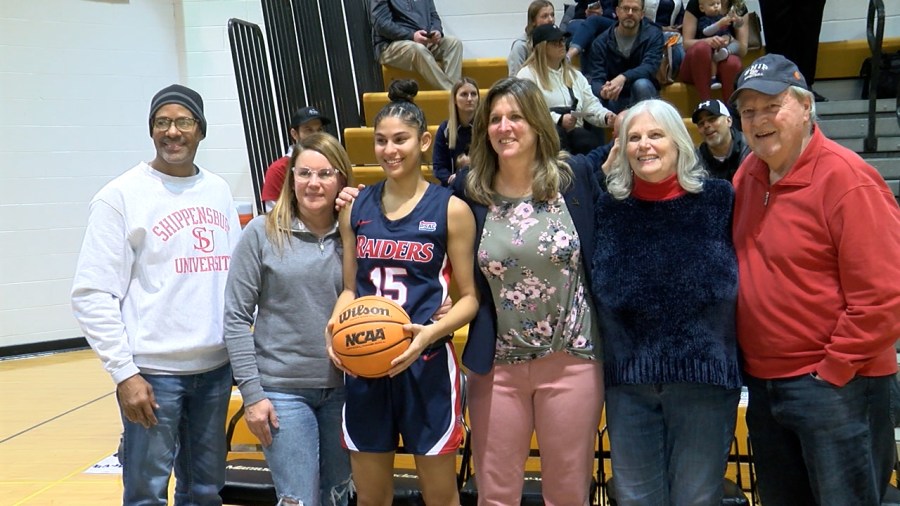 Jones surpassed Shippensburg University Hall of Famer Lauren Beckley’s school and PSAC career points record of 2,407 — she only needed four to get in Monday night but now has 2,455 points after her 51-point blast. It’s the most points by a woman in an NCAA Division II game in more than two years since Drury’s Hailey Diestelkamp scored 53 points against Rockhurst on Feb. 29, 2020.

Meanwhile, her 14-of-14 performance at the free throw line on Monday put her past West Texas A&M’s Emily Brister to become the NCAA Division II record holder for free throws. It took Jones five to pass Brister (763) and more than surpassed that mark.

“I only knew about the one record, I didn’t know about the free throws,” Jones said afterwards.

“I think the pressure was a little less because she only needed four points,” said head coach Kristy Trn. “I hope it’s a big load off their shoulders because I’ve been talking about this for four years.”

Trn added, “I feel very blessed. I was blessed to have coach Lauren Beckley and now Ariel has given me a second chance to feel that. I thought it was a great gesture that Mr and Mrs Beckley were here at the game tonight to pass the torch to Ariel.”

Jones scored her first bucket of the night less than two minutes into the game, and at the 6-11 mark in the first quarter, Jones banked her first three-pointer of the night to officially break the all-time PSAC career point record. However, Shippensburg (15-3, 10-2 PSAC) trailed by six points early in the second quarter.

Early in the second quarter, SU made three consecutive threes (two by Jones and one by graduate Erin Gibbons (Swoyersville, Pa/Wyoming Valley West (Mansfield))) to take a one-point lead. The game went back and forth, with a 32-32 tie and less than six seconds remaining, only for Millersville (10-8, 6-6) to make a late jumper to gain a two-point lead score halftime.

The third quarter was the turning point for the Raiders as Gibbons hit back-to-back threes, a fastbreak layup by Junior Treasure George (Harrisburg, Pa./Bishop McDevitt) and a fastbreak jumper by Jones that gave the Raiders an eight. Points lead, 46-38.

SU didn’t stop the momentum from there, going on a 6-2 run to have a 52-42 lead. The Marauders ended up coming back with back-to-back threes to reduce the deficit to three points. At the 2:16 mark of the third quarter, Jones hit two free throws to break Brister’s NCAA Division II record.

Jones added a team-high of six assists and had six rebounds and two steals. Her seven three-pointers and 15 field goals are both new career highs. She also drew 14 fouls in an unforgettable night.

Former deputy chance encounter with boy he saved: ‘I wonder if that’s him’

Submit pictures of your babies born in January 2023