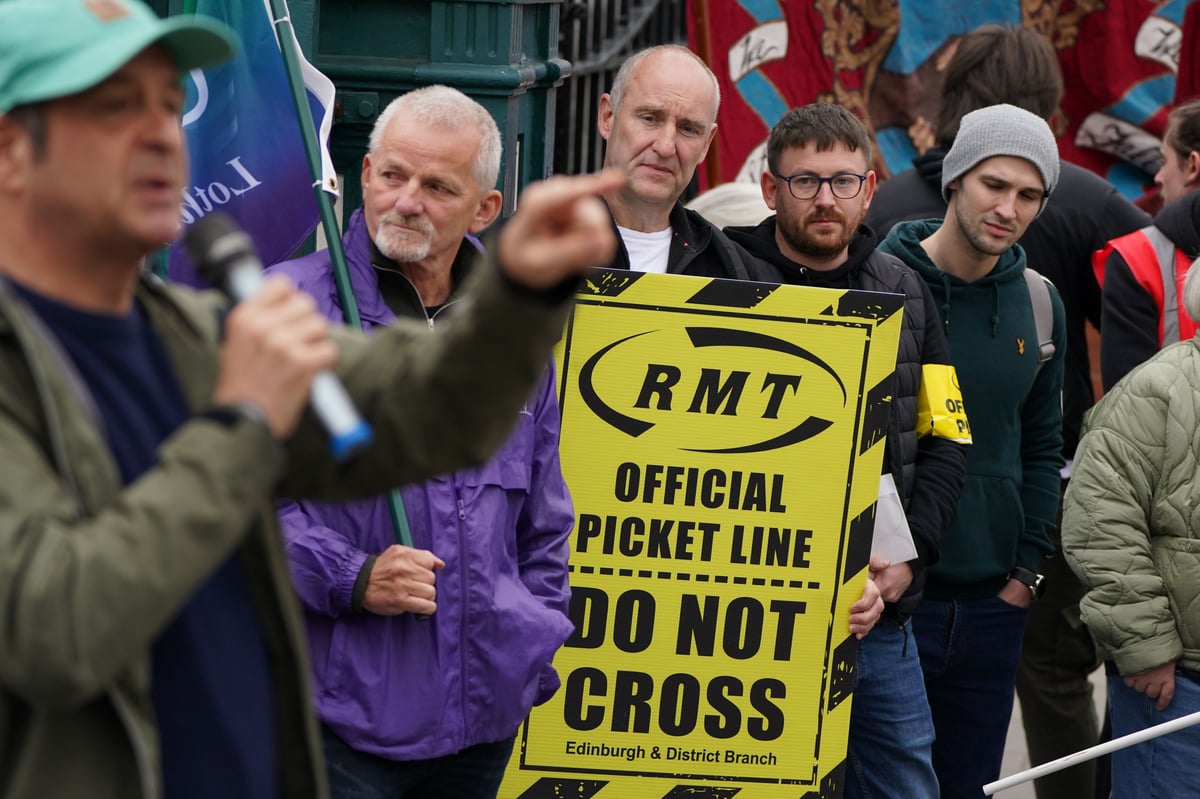 Passengers have been warned to expect “significant disruption” as rail workers from several companies disembark this weekend in an ongoing dispute over pay.

Unions Aslef and the Railway, Shipping and Transport Union (RMT) have voted “in no uncertain terms” to strike against the companies they say have failed to give railway workers a pay rise that the corresponds to inflation.

Network Rail workers who are members of the RMT are staging two 24-hour walkouts on Saturday 1 October and Saturday 8 October as part of a wage dispute.

ScotRail has warned passengers to expect “significant disruption” to the network as signalers and safety-critical workers disembark as part of the RMT strikes.

A handful of services are expected to operate on key routes, with the rail operator urging travelers to check the app and website before traveling.

While the rail operator normally runs around 2,150 trains a day, over the next two Saturdays it will only run trains on 11 routes across the Central Belt, Fife and the borders.

On October 1st and 8th, ScotRail will run 379 trains – one more than was laid down during the August strikes.

While ScotRail drivers are not on strike, drivers from other companies such as LNER and TransPennine Express will disembark on Saturday.

Services will resume on Sunday, but disruption may occur when signal boxes are brought back into service.

Postal workers from the Communication Workers Union are also set to strike Saturday in an ongoing row over changes to working conditions.

Rail and postal workers will gather at Edinburgh Waverley on Saturday morning to show their “mutual solidarity” for each other and demand a fair wage from their employers.

Aslef regional organizer Kevin Lindsay said: “Workers are fed up with bosses paying themselves huge dividends and salaries while they expect workers to take pay cuts.

“We rejoice to stand shoulder to shoulder with our brothers and sisters in the RMT and CWU who also face the same struggle and struggle as our members.

“We will also stand together and show our solidarity with other struggling workers.”

Network Rail Chief Executive Andrew Haines said: “Despite our efforts to compromise and achieve a breakthrough in talks, rail unions remain determined to continue and coordinate their strike action.

“This is only to ensure our employees are unnecessarily forgoing even more pay, causing even more disruption to our passengers and further hampering the railroad’s recovery from the pandemic.

“Passengers wishing to travel this Saturday and even next Wednesday and next Saturday are asked not to do so unless absolutely necessary. If you have to travel, expect disruptions and make sure when your last train leaves.”

Further industrial action will take place later in the month when RMT members working for ScotRail go on strike on Monday 10th October.

Lala Kent opens up about being in a 'strange' place

Oregon hits new record for COVID cases for 4th day in a row, more than double the old mark

Meaning of Manchin’s ‘No’