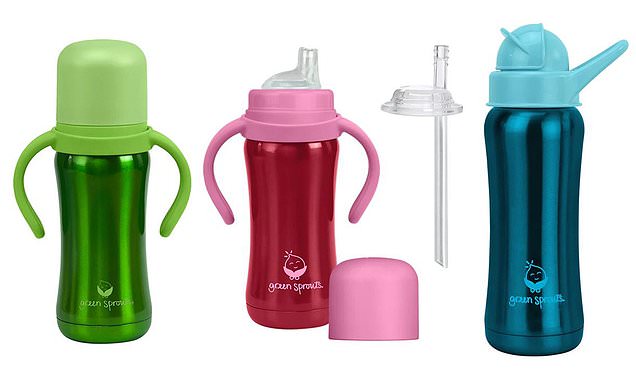 Tens of thousands of stainless steel sippy cups and baby bottles are being recalled over fears they could poison children.

The bottoms of these bottles and tumblers manufactured by Green Sprouts may come loose exposing a leaded solder point which is a potential hazard to children.

There have been no reports of injuries so far, according to the US Consumer Product Safety Commission, but there have been seven cases of the base breaking.

Customers are urged to request a full refund for the $14-$19 bottles sold at Target, Wholefoods and Amazon.

According to the World Health Organization (WHO), high exposure to lead in children can cause irreversible brain damage, coma, convulsions and even death.

“Children who survive severe lead poisoning may be left with intellectual disability and behavioral problems,” the agency says.

Lead exposure in children is often difficult to monitor without immediate symptoms.

However, if there is a suspicion that a child has been exposed, parents should speak to their child’s doctor about a blood test.

Lead is more harmful to children under the age of six because their bodies are still developing.

– damage to the brain and nervous system;

This can lead to:

The lead-based solder points that prompted the recall are used in the bottles to create a vacuum between the inner and outer layers.

Green Sprouts said they weren’t caught by testing because they’re “not accessible in normal use.”

The products were also sold at Buy Buy Baby, Bed Bath and Beyond, Drugstore and babyhaven.com between January 2020 and September of this year.

Customers are encouraged to throw away the bottoms of the bottles but keep using the plastic parts. You can request a full refund from the company.

Green Sprouts said in a statement, “Had we known that a lead-containing component in these products could become accessible, we would not have commercialized them.

“Now that we know this, we are voluntarily recalling these products.”

They added, “As we move closer to redesigning these products, we will ensure that lead is not used as a solder material, regardless of whether it would be accessible.”

All baby bottles are tested in Consumer Product Safety Commission (CPSC) accredited laboratories prior to sale.

https://www.soundhealthandlastingwealth.com/health-news/thousands-of-sippy-cups-sold-nationwide-are-recalled/ Thousands of sippy cups sold nationwide are being recalled

"This Ain't No Slave Movie..." (Exclusive) Will Smith Talks 'Emancipation'