With the holidays just around the corner now, this week Apple rolled out the last of its 2022 updates in the form of iOS 16.2 and associated OS updates for other platforms. The updates include a slew of new features, with attention on the software side now turning to iOS 16.3 for early next year. 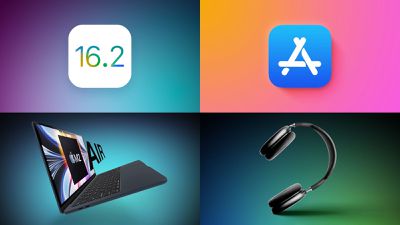 Other Apple news and rumors this week included news that Apple is trying to please European regulators by working to support alternative app stores starting with iOS 17, rumors of a larger 15.5-inch MacBook Air, which will be out next year, and more, so read all the details below!

iOS 16.2 released with these new features

Apple this week released iOS 16.2 for the iPhone 8 and newer after two months of beta testing. The software update includes over a dozen new features, including the Freeform app, Apple Music Sing, an option to extend end-to-end iCloud encryption, and more.

Be sure to check out our iOS 16.2 features list for a full rundown of everything new for iPhone.

The next betas are also already available, including iOS 16.3, which will allow you to use hardware security keys with your Apple ID.

Apple is preparing to allow alternative app stores on the iPhone and iPad in the European Union as part of efforts to comply with the Digital Markets Act Bloombergis Mark Gurman.

According to the report, Apple is aiming to roll out the changes as part of iOS 17, which is expected to be announced at WWDC next June. It’s unclear if third-party app stores are allowed worldwide.

15-inch MacBook Air is expected to launch in Spring 2023

Apple is developing a larger 15.5-inch MacBook Air that could launch in the first quarter of 2023, according to display industry analyst Ross Young. The current MacBook Air with M2 chip is available with a smaller 13.6-inch display.

Young also said Apple plans to release a new 13-inch MacBook Air with an OLED display in 2024. This could be the first Mac to use OLED technology, allowing for increased brightness, improved contrast ratio and longer battery life.

Two unreleased Mac models have been spotted in Steam’s monthly device survey – they are likely to be the next 14-inch and 16-inch MacBook Pro models with M2 Pro and M2 Max chips.

The same Macs seem to have popped up in Geekbench results a few times, offering a closer look at the performance of the M2 Pro and M2 Max chips. The laptops are scheduled to hit the market in 2023.

This week marked the two-year anniversary of Apple’s release of the AirPods Max. The over-ear headphones haven’t been updated since then, but we’ve outlined what we’ve heard about the AirPods Max 2 so far.

There are many features that AirPods Max 2 could inherit from the second generation AirPods Pro, such as: B. adaptive transparency, IPX4-certified sweat and water resistance, skin detection sensors and the U1 chip.

Following the release of iOS 16.2, we’ve rounded up five upcoming iPhone features that Apple previously announced but has yet to release, such as: B. An Apple Pay Later financing option and an Apple Card savings account to earn interest on Daily Cash.

One of the features mentioned in the list has meanwhile been introduced in the iOS 16.3 beta, while some others may not appear until iOS 16.4 or later.

Each week we publish an email newsletter like this one that highlights the top stories from Apple, making it a great way to get a bite-sized recap of the week covering all the important topics we’ve covered and related stories for a large picture view.

so if you want to have top stories like the summary above sent to your email inbox each week, Subscribe to our newsletter!

Man, 19, in violation of community order

The 4 Main Advantages of USB Dongles

AWS CISO: Why our new security lake is game-changing for the industry

Amazfit GTR 3 Pro gets its first price cut to $190, plus more