Police say three people were shot and one was killed in an apparent home invasion on Homestead Road in Houston on December 21, 2021.

Three people were shot and one was killed in an apparent home invasion at an apartment complex on Homestead Road in Houston on Tuesday, December 21, 2021, police said. Three masked men are accused of carrying out the robbery, according to police. No arrest warrants have been issued. The victims have yet to be identified.

Authorities said one of the victims died at the scene and the other two were taken to the hospital by the Houston Fire Department. Their conditions were not immediately known. Police say the shooting is still under investigation and some details have been released. According to police, the shooting happened around 8 p.m. at 9603 Homestead Road. Video from the scene shows several police and other emergency vehicles at the apartment complex.

Houston Police said in a press release on December 22 that the victim was a 35-year-old man. The other victims were a 28-year-old woman and a 30-year-old man, police said. According to police, they are expected to survive. The Houston Police Department’s Homicide Division is investigating.

Houston Police Assistant Superintendent Belinda Null, of the department’s Criminal Investigation Command, said they received a 911 call about “an ongoing shooting” around 7:59 p.m. and officers from the department’s Northeast Division arrived on the scene at around 8:06 p.m. and found three people had been shot.

Null said at the scene, “Two of them were transported and are expected to survive. The third victim died at the scene. Initial investigation revealed that three masked men attempted to enter the apartment, which we suspect may have been a robbery, then shot individuals and fled the scene.

“That’s really what we have right now,” Null said, adding that the investigation would continue into the night and early Wednesday morning. The murder victim has yet to be identified by the Harris County Forensic Science Institute. Null did not say whether the victims knew the robbers or whether the apartment where the robbery and shooting took place was targeted. 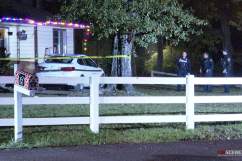 Null said they had no further description of the robbers other than three masked men. She added that no one else at the scene was injured. Null said the two surviving victims are being interviewed by investigators to learn more about what happened. She did not provide any additional information. Anyone who knows anything about the case or other unsolved cases in Houston can call the HPD Homicide Division at 713-308-3600 or CrimeStoppers at 713-222, police said. – TIPS.

The home invasion occurred hours after a man and woman were tracked home from a game room and shot during a home invasion and attempted robbery at a house on Harvey Lane. The victims of that shooting, a couple in their 30s, were all expected to survive. Two suspects fled the scene after that shooting, police said.

When asked about the rise in home invasions and tracking home robberies, Houston Police Lieutenant Emanuel Pavel said, “Immediately if you see something suspicious, please call the police. The quicker you call us and let us know what’s going on, we can try to get here as soon as possible. Also, try to make sure that when you are driving home, if you see something suspicious, someone is following, a car, a car of the same color, follows you around, I advise you not to When you get home, call 911. Better be safe than sorry.”

Pavel added, “Talking to officers, there was actually a similar incident with a similar description earlier last week. The story is of the same kind, same kind of home invasion. So it’s happening. So take precautions. See if anyone is following you home. Better to be safe than sorry, give us a call and we will try to get there as soon as possible to catch those who are acting.”

CONTINUE READING: Houston Woman Killed By Her Own Dogs: Police

Americans' Optimism About COVID Get Better 20% Off with Omicron Surge: Poll

The Infrastructure Act Becomes a Gift of the Biden Coalition

School is personal again, but the five-day school week is often not

There are many more sanctions to help Ukraine