Bridgetonbased on the book series by Julia Quinn
of the same name, premiered in December 2020 and went on to become Netflix’s most-watched original series. The show, executive produced by Shonda Rhimes, follows the Bridgertons, a distinguished upper-class English family of eight siblings and their widowed mother, during Regency-era England. Each season centers around a different Bridgerton sibling – Anthony, Benedict, Colin, Daphne, Eloise, Francesca, Gregory and Hyacinth – with the first season focusing on Daphne Bridgerton (played by Phoebe Dynevor), the eldest of the Bridgerton daughters, and their relationship follows the Duke of Hastings (aka Simon Bassett), played by Regé-Jean Page.

Bridgeton Season 2, which premiered March 25, 2022, follows Anthony Bridgerton, the viscount and eldest Bridgerton son, on a search for a viscountess. The second season builds a love triangle between Anthony and two new characters: Kate and Edwina Sharma, two sisters from India who come to London with their mother Mary to find Edwina a husband. A love triangle begins when Anthony, London’s most attractive bachelor, and Edwina, the Queen’s anointed diamond of the season, date and become engaged – despite Anthony’s feelings for Edwina’s older sister Kate, who has a love-hate relationship with him.

“It’s a complicated love triangle because it’s not a conventional one. Certainly in a show like Bridgeton, you will not get catfights between women over men. It’s just not the mood at all. It’s a sister before the gentlemen for sure,” Charithra Chandan, who plays Edwina, told Extra in 2022. She continued, “What you get is three people who are connected for completely different reasons and are attracted to each other in very different ways, and it’s that entanglement between the three that’s arguably the drama of this season. And I think that even though it’s like a really crazy situation, every single relationship is really relatable, I think, and you would probably find it in your own life.

In an interview with Entertainment Weekly in 2022, Jonathan Bailey, who plays Anthony, called the love triangle “dangerous.” “You can understand why he’s drawn to both. And they both feel attracted to him in turn. It’s an interesting love triangle; It’s dangerous when they’re siblings. It’s bestial between them in a way Season 1 wasn’t. They’re all animals together,” he said. “Edwina and Kate are the embodiment of his approach to love – one is head, one is heart. The push and pull [illustrates] how intense it is to fall in love in a society so rigid, where gender roles are so specific, and how completely counterproductive these roles can be to happiness, progress and love.”

So who does Anthony end up with? Bridgeton Season 2, Kate or Edwina? Read on for who Anthony chooses in the Bridgerton season 2 finale and what happens to the other Sharma sister.

Who does Anthony end up with? Bridgeton Season 2? 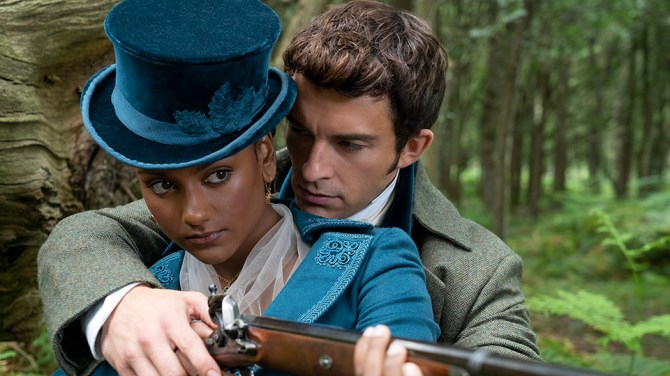 Who does Anthony end up with? Bridgeton Season 2? The answer is Kate Sharma. Anthony and Kate meet in episode 1 of Bridgeton Season 2 when Anthony sees her horseback riding in the woods and they immediately argue about whether Kate should ride alone. They reunite later in the episode when Kate and her younger sister Edwina attend Lady Danbury’s ball, where they learn that Anthony, aka the viscount and London’s most eligible bachelor, is looking for a woman to be his viscountess. Anthony and Kate reunite outside of the ball, where Kate denounces Anthony for his arrogance while Anthony teases Kate for her attraction to him. Back at the ball, the Queen names Edwina Diamond of the Season, making her the most desirable partner for Anthony and leading him to court her as his wife. Before he can do so, however, Edwina tells Anthony that he needs her sister’s blessing first, and Anthony realizes that Kate, the women he has had a love-hate relationship with since they met, is the older sister of the Relay Diamond he wants his future to become a viscountess.

Season 2 continues with Anthony trying to convince Kate to give him her blessing to bring Edwina to court before Kate acquiesces, and Anthony and Edwina become engaged – despite Anthony and Kate’s clear feelings for each other, which everyone are unknown to them. Anthony and Edwina’s engagement is nearly dissolved when Anthony learns that Kate and Edwina’s mother, Mary, only wants him to marry her so that Edwina can receive a dowry from Mary’s family, the Sheffields. At the start of the season, Kate tells Lady Danbury that the Sharmas came to England from India to find financial stability after being broke following the deaths of Kate and Edwina’s father. Unbeknownst to Edwina, the Sheffields had a deal with the Sharmas to cover Edwina’s dowry and look after her financially if she married an Englishman of the nobility. (Since Kate is only Edwina’s half-sister and not Mary’s biological daughter, she would not benefit from the deal.) Upon learning of the pact, Anthony almost breaks his engagement to Edwina before Kate convinces him that Edwina did it. She doesn’t know about the tell and tells him she just wanted her younger sister to have a better life. Anthony agrees to remain engaged to Edwina and to continue to look after her and the Sharmas financially, even if the Sheffields don’t cover the dowry.

On the day of Edwina and Anthony’s wedding, Edwina decides to call off the wedding at the altar after realizing Kate and Anthony’s feelings for each other behind her back. Edwina tells Kate and Anthony that she doesn’t want anything to do with either of them. The wedding episode ends with Kate telling Anthony that she decided to return to India so as not to hurt anyone, before the two share their first passionate kiss. The season continues with Edwina forgiving Kate and giving her her blessing to be with Anthony and experience what love is after caring for her family for so many years. For her part, Lady Bridgerton also convinces Anthony to be with Kate after seeing her son’s other side whenever he is around her. Bridgeton Season 2 ends with Anthony professing his love for Kate before proposing. Kate accepts Anthony’s proposal and the two become engaged. As for Edwina, Season 2 ends with the Queen introducing Edwina to her nephew, an “available” prince.

For more about Bridgetonread Julia Quinns Bridgeton book series. The book series – consisting of eight ledgers, an epilogue and four prequels– follows the Bridgertons, a distinguished upper-class English family of eight siblings and their widowed mother during Regency-era England. Each of the books follows a different Bridgerton sibling – Anthony, Benedict, Colin, Daphne, Eloise, Francesca, Gregory and Hyacinth – on their quest to find true love. The first Bridgeton Book, The Duke and Iwhich followed the love story between Daphne Bridgerton and the Duke of Hastings (aka Simon Bassett) was the inspiration for Season 1 of Netflix Bridgeton TV series. the second book, The viscount who loved mewho succeeded Anthony Bridgerton and Kate Sheffield (renamed Sharma in the Bridgeton show), was the inspiration for season 2. The third book, An offer from a gentlemanfollows the relationship between Benedict Bridgerton and Sophie Beckett and will likely serve as inspiration for Season 3. The most important eight Bridgeton Books are available on Amazon for $62.99, saving fans about $30 by purchasing each book individually.

https://stylecaster.com/who-anthony-end-up-with-bridgerton/ Who does Anthony end up with in Bridgerton Season 2: Kate or Edwina?

If the rumor is true, Arteta will lose many Arsenal fans - in our opinion

Sandals trends 2022: These 4 styles are omnipresent this summer