When an Australian mother posted a picture of her baby bump on social media after becoming pregnant with her second child, she got a huge backlash. Netizens mocked her for the extraordinary size of her baby bump. The birth of a baby is one of the most remarkable events in a woman’s life,

especially if she had been looking forward to starting her family. The woman does whatever her doctor directs to ensure that she has a smooth and trouble-free pregnancy. During pregnancy, a woman’s body goes through physical changes, she is uncertain about her appearance. 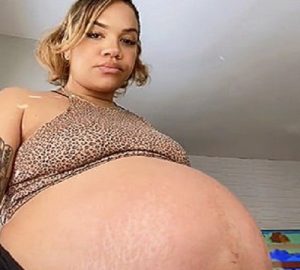 Luckily, many friends and family members are supportive of the pregnant women, apart from a few people who make disturbing statements and bully the mother when they feel their baby bump isn’t living up to their expectations. Elisha Bakes, 30, was on top of her world when she found out she was pregnant again in 2018. She lived with her partner Tane.

and a son, Kyson, aged about two, at their home in Melbourne, Australia. When her pregnancy turned 14 weeks, she decided to share her joy with her 32,700 followers on Instagram, expecting them to send well wishes. However, things took a different turn when she shared her picture on Instagram. Instead of applauding her and greeting her well wishes,

Her followers shared hurtful comments. Elisha’s followers on Instagram found Bakes’ baby bump too big. They believed she was more than 14 weeks pregnant and asked her to give them the exact dates. Some people even said that Bakes has to eat unhealthily to make her belly look bigger.

Study of concern: Men with low sex drive and loss of libido are likely to die early

Seizing opportunities in Syria, UAE leads Arab efforts to do business with Assad

Can the deadlock in Ukraine be resolved diplomatically?