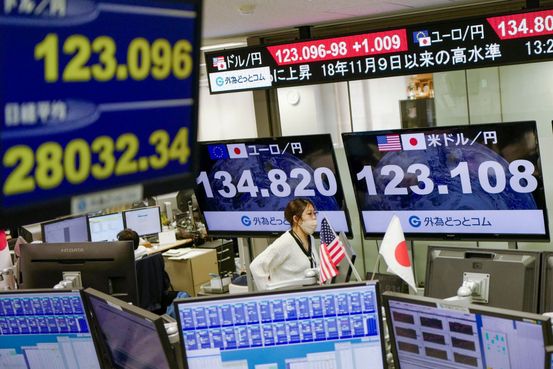 TOKYO — The dollar rose to a six-year high against the yen on Monday, fueled by Japan’s preference for a weaker currency and — in a postponement — tacit acceptance from US officials focused on inflation.

For the first time since August 2015, a dollar briefly bought more than 125 yen in the currency markets on Monday, down from around 110 yen six months ago. The dollar changed hands in Tokyo late Monday at around 123.93 yen.

The strong dollar means Americans and others whose currencies are tied to the dollar can get more bang for their buck when buying Japanese-made goods, a potential boon given that US inflation is near 8%.

It also means that Japanese manufacturers have lower costs in dollar terms and gain an advantage over US competitors. This is driving Japanese policymakers to say they are broadly in agreement with currency moves.

“There is no change in the fundamental structure that a weaker yen has a positive impact on the Japanese economy by boosting the overall economy and prices,” Bank of Japan Governor Haruhiko Kuroda told a parliamentary session on Friday .

The central bank estimated in a January report that a 10% depreciation of the yen would boost Japan’s gross domestic product by about 1%.

On Monday, top government spokesman Hirokazu Matsuno said Japan is watching the market closely and “quick moves are not desirable.”

The decline in the yen is largely due to the widening of the interest rate differential between Japan and the US. 10-year US Treasuries are now yielding nearly 2.5% after the Federal Reserve hiked rates and scheduled six more hikes this year. That’s 10 times the 0.25% yield on the equivalent Japanese government bond — at the high end of the Bank of Japan’s target range. Meanwhile, the two-year government bond yield is 2.3%, while the Japanese equivalent yield is just below zero.

On Monday, the Bank of Japan entered the market to defend its policy, twice offering to buy an unlimited amount of 10-year government bonds at a price that would prevent yields from rising any further. It said it would conduct similar operations Tuesday through Thursday. Although low, the Japanese yield is still the highest it has been since January 2016.

All other things being equal, the interest rate differential between the US and Japan makes it better to hold dollars than yen as yields are higher. In particular, analysts say the yield gap is reinvigorating the “carry trade,” where investors borrow yen at low interest rates and swap the money for dollars to earn more interest.

The central bank’s Mr. Kuroda is under little pressure to raise interest rates in line with the US trend as inflation in Japan remains relatively dormant.

In the past, a sharp fall in the yen would likely have provoked outrage from US politicians and companies. During his tenure, President Donald Trump frequently voiced his dissatisfaction with other countries’ weak currencies.

“They’re playing the devaluation market and we’re sitting there like a bunch of fools,” Mr Trump said shortly after taking office, highlighting Japan, China and Germany.

But now a strong dollar is depressing the cost of imported goods and dampening inflation, a top concern for the Biden administration ahead of the fall midterm elections.

The Treasury Department’s latest foreign exchange report, released in December at a time when the yen was already weakening, expressed no concern about the moves.

While many Japanese companies have offshored production, limiting the benefits of a weak yen, there is still enough production left in Japan that the benefits can be significant.

The Daiwa Institute of Research estimates that a 10 yen depreciation against the dollar — for example, if the dollar buys 125 yen instead of 115 yen — would increase a measure of collective operating profit for Japanese companies by nearly 1.5 trillion yen, or about $12 equals billion. Automakers in particular still export many Japanese-made vehicles to the US, and the dollars they earn from American car buyers are now worth more in yen.

A pre-market primer full of news, trends and ideas. Plus current market data.

Takahiro Sekido, a strategist at MUFG Bank, said it is difficult for the US to depress the dollar even if it wanted to because the world is turning to the US to replace Russian energy. To buy American oil and gas, countries need dollars.

“The US has no choice but to accept a strong dollar, at least in the short term,” Sekido said.

The weak yen is not entirely good for Japan because it increases the burden of oil and gas imports, which Japan needs dollars to purchase. Higher oil prices and unfavorable exchange rates are eventually passed on to consumers, who pay more for gas and electricity.

The Japanese government is tackling the energy problem not by trying to change exchange rates, but by providing subsidies to oil traders and other support to ease the sting.

“We must react flexibly to rising prices for oil and other products,” Prime Minister Fumio Kishida said on Monday.

write to Megumi Fujikawa at megumi.fujikawa@wsj.com

Facebook, other researchers step up the fight against online hiring

No stranger to failure, the founder of Sunac China is struggling to save his property empire